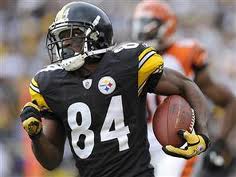 PITTSBURGH — Cameron Heyward saw the shift in the Cincinnati Bengals’ line and knew he had a chance.
A 28-yard field goal by Cincinnati’s Mike Nugent had been wiped out by a delay of game penalty midway through the first quarter Sunday afternoon, forcing the Bengals to try again from
33 yards.
The second time around, Heyward burst through the line and blocked the kick. That kept the score tied at 0-0 just two plays after a motion penalty had wiped out an apparent 4-yard touchdown pass from Andy Dalton to tight end Jermaine Gresham.
Talk about a momentum shift in a game the Steelers would eventually win 35-7 at Heinz Field.
“Ziggy (Hood) got good penetration on the first kick and I saw the guard move over so he could block him,” said Heyward, the rookie defensive end who was the Steelers’ first-round draft pick
this year from Ohio State. “That left the gap wide open for me to shoot through. It was a good feeling. You always want to make a big play, especially one that can set a tone.”
By halftime, the Steelers had the game safely in hand with a 28-7 lead as they scored the game’s first 21 points in a span of 4:14 during a 28-point second quarter.
Yet it all started with Heyward’s block.
“It was a big play,” said Steelers wide receiver Antonio Brown, who later made a big play of his own. “A real big play.”
The special teams played a major role in allowing the Steelers to blow the game open in the second quarter.
The Steelers marched 87 yards in nine plays following Heyward’s block. Rashard Mendenhall capped the drive with a 3-yard touchdown run.
The Steelers then successfully executed an onside kick with Ryan Clark recovering the free ball. Three plays later, Mendenhall had a 5-yard touchdown run.
The Steelers got the ball right back again when Stevenson Sylvester hit Bengals returner Brandon Tate, forcing a fumble that Emmanuel Sanders recovered. Ben Roethlisberger threw a
12-yard touchdown pass to Mike Wallace three playes later and the Steelers suddenly were ahead 21-0 with 8:33 left before halftime.
The Steelers had one more big special teams play left as, after Cincinnati cut the lead to 21-7, Brown returned a punt 60 yards for a touchdown with 1:16 to go in the half to restore the three-
TD lead. It was the Steelers’ first punt return for a TD since Santonio Holmes had a 65-yarder at Carolina in 2006.
“My guys made a lot of good blocks for me and once Bryant McFadden took out the guy on the edge, all I had to do was turn the corner and it was me and the punter,” Brown said. “I’m going to
win that race.”
“The guys on special teams made plays,” Tomlin said. “We’ve gotten solid contributions from guys in that group. They take a great deal of pride in what they do. They are a legitimate phase of
our team and we appreciate their efforts.”