27 Games in under Sullivan, Penguins on same pace as they were under Johnston 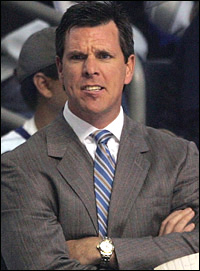 The Penguins Monday night rallied on a Chris Kunitz goal with 3:19 left in regulation to pick up a point. Kunitz game tying goal was almost identical to the Penguins game tying goal vs the Panthers a little over a week ago on how it played out.

Out of an icing, Florida wins the puck back but Kunitz with great anticipation gets to the puck first off the draw and does the rest from there.

Kunitz on a bit of a resurgence has 13 points in his last 12 games. His improved play is also happening with the Penguins playing a system that resembles his best years under Bylsma.

You could argue both teams deserved a point.

— Phil Kessel blew a chance in overtime to win the game, the type of scoring chance he’s paid to bury. After a strong game vs the Hurricanes, Kessel struggled to create inside the dots 5 v 5, (area that’s a big frustration with the coaching staff) and had a rough corsi night, on the ice for just 7 shot attempts, 17 against (29%).

— Before everyone is ready to anoint Sidney Crosby as the best player in the game again, let’s not forget Patrick Kane is now up to 34 goals and 82 points, a 29 point lead over Crosby. At least for this season, the honor is with Kane.

— When Crosby’s not setting the world on fire with Lemieux like production, the AHL guys playing with energy working hard narrative being so great for the team suddenly loses steam.

The assist was taken away.

What a flattering shot of him.

2 goals in the last 3 games. booooring!

D we need instant buzz about DB and Bennett for Stan

I’m not going to do Sam’s work for him but here’s some food for thought for those capable of understanding the game, currently the top 5 teams on the powerplay(Wash, LA, SJ, Bos, Dall) are all in playoff position and 3 of the 5 are leading their divisions, on the other hand, the 5 teams currently worst on the powerplay(Tor, Cal, Winn, Car, Fla) only Fla is in position to make the playoff while the other 4 will be entering the Aston Matthews sweepstakes. Translation for those capable of understanding the game, successful teams rely heavily on their powerplay production… Read more »

That wasn’t sam’s contention – his contention is that the Penguins rely heavily on the power play. That’s it.

I know, that’s why I focused on the general principle of good teams are good on powerplay and not so much the Pens situation. I didn’t want to distract him from proving his point on the Pens relying heavily on the power play.

You know they’ve lead the league in local viewership for 7 years running, correct?

Every fan base has people only interested when that team is winning-those are facts. Plus, its not like the NHL is entertaining these days

nonono only american Fan base is like that everywhere in the world fans stick by their home town. soccer or even canadian hockey teams you have fans stick by.but you american fans are spoiled and only used to winning if the product is not good right away you change to the next team or sport. Spoiled brats in proper English

WTF Why do we have instant buzz about Orpig

Because DePaoli knows you’re not over him yet. Sexually.

I wish we could put sam on waivers and send him down to insidewilkesbarresports.com

Even aside from stanch’s point, I’d rather watch this system lose than Johnston’s system. They’ve been playing like they actually care again.

What’s the differnece between the two systems, please break it down for us coach? The reality is there’s very little differnece to the on-ice X’s and O’s. The diffrnece is they dumped Scuderi and Crosby decided he wanted to play hockey again.,

Diego trust me it makes a big diffrence dumping scuderi for Dailey . now only if they can Dump lovejoy

few days ago i was listening jets Assitant coach Pascal Vincent future nhl coach. what he said was the last 2 years the league has changed alot and the change is that more and more teams have mobile Defense that can do a good transition play Which Pens were one of the worst teams last year and this year too up until daley came to make it a bit better the situation .i have said it before as well your best offense is your defense if your defense sucks and cant make good transition play the team goes nowhere as… Read more »

God this is difficult to do but Maloni is 100% correct. Sullivan himself has even said that he really didn’t change much from a system standpoint since his system and MJ’s system were so similar to start with, he’s adjusted some of the philosphies and responsibilities within the system but the x’s & o’s really haven’t changed.

You must not be watching then.

Here, Here. I’m done with InsidePGHSports after this incredibly stupid article, and viewership comments. Utterly Pathetic. If you can’t see the different between Sullivan and Johnston and their teams, you are either retarded or blind!

who cares what you think was a good game – you have an eye for hockey the way Yoda has an eye for goaltending – it’s like asking the blind kid how pretty the flowers are.

Agreed Stanch. Pens are 7-2-1 in their last 10 games and have missed some big name players during that stretch. Not a great analysis at all.

They were also 9-1-0 from 10/15-11/6 under MJ, the current injury issues are definitely a valid point but you can’t just hand pick small samples from the overall comparison as a means for saying the overall analysis is subpar, you can just as easily cherry pick numbers to prove the other side.

well reason pens shined a bit was because of the powerplay was clicking in the month of Jan but since 2010 this team hasnt been impressive 5v5 when they should be more dangerous with the star players they have .our star players getting Big Bucks to be Power play Specialist Like it or not Fleury has been the reason where pens are today.Without him this team would be battling for the last place with the leafs for Austin matthews. Only diffrence between leafs and pens would be pens have high paid star players and leafs dont and both last place… Read more »

Hey sam – how about you back that up – give us a few stats from 2010 to now rather than just showing how full of shit you are like when you call Malkin a PP specialist and ten people shoot you down because you’re a french idiot. Give us some numbers. Otherwise, shut the F up.

If you’re going to do this type of analysis, you should at least acknowledge that, the 13-9-5 record started off as 0-5? Or something thereof? Or maybe tack on the fact that Johnston had a largely healthy lineup, as opposed to playing the last 5 games sans Fehr, Bonino, Malkin, Bennett, etc. And this isn’t to pump “Sully’s” tires or anything, but christ, a 1-1 comparison is kinda horseshit. Dig a little. Pretend you analyzed the situations.

0-4, starting with the game Fleury played concussed (Kunitz) against Caps.

There’s another injury left off from above.

The injury issues are very valid but MS starting 0-4 is pretty irrelevant to the conversation since MJ started the season 0-3 as well, if you throw out the first 4 games for MS to eliminate the 0-4 then justifiably you should throw out the first 3 under MJ as well to keep the comparsions equal.

You can make that argument if you’d like. I wouldn’t. MJ had an entire season and a training camp to mold this team for how he wanted it to play. He started the season with his full arsenal. Straight off of an offseason which I imagine he was allotted input into. I could very easily make the argument that those first four games, much of which sans starting goaltender, WAS MS’s training camp. There’s not going to be an EQUAL comparison, but judging by how the team has played since then, I’m much more willing to throw out MS’s first… Read more »

Yes injuries are hitting the team now. Fleury was also playing ridiculous early in the year. Fleury stole a few points for Johnston but Sullivan he’s had a few games that costs the team.

they are who we thought they were