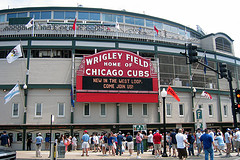 Sources tell TIOPS, the Chicago Cubs and the Pittsburgh Pirates have agreed to a deal in principle that will send Pirates reliever John Grabow to Chicago.
The deal is awaiting approval from the commissioners office and is expected to be announced following the Cubs afternoon game against the Houston Astros.
There has also been word that Class AAA pitcher Tom Gorzelanny will be heading to Chicago that would make the deal a four player deal.
A Player to be named later, depending on the performance of Gorzelanny could also be involved that would make the deal a 5 player deal.
The return for the Pirates is unknown but as mentioned earlier the Pirates were heavily interested in pitching prospect Jay Jackson and SS Starling Castro.
Updated: 5:06 p.m. – Pitching prospect Jay Jackson is missing his start tonight for Class AA Tennessee because he has been demoted to Class A Daytona.
Jackson is 5-5 with a 3.70 ERA in 16 games started with Tennessee. In 82.2 innings pitched he allowed 35 runs (34 earned) on 73 hits, walked 41 and struck out 93.
The Pirates have been scouting Jackson extensively
Updated: 5:20 p.m. – Deal will be announced following the Cubs – Astros game. No confirmation yet on the Pirates return but it has been confirmed to TIOPS that Pittsburgh will receive two players in return and possibly a third (maybe PTBNL
Grabow and Gorzelanny will become the 12th and 13th Pirates that have been traded from their 2008 opening day roster.
5:41 p.m. – More Jackson Buzz?: Kevin Goldstein of Baseball Prospectus hears, Jackson may be involved.
5:44 p.m. – Confirmed via press release from Pirates: Acquired RHP Kevin Hart, third baseman Josh Harrison and RHP Jose Ascanio.
Hart, 26, pitched on Thursday for the Cubs, picking up the win, giving up three runs on six hits over six innings against the Houston Astros. He is 3-1 with a 2.60 ERA in eight appearances (four starts) with the Cubs this season.
Hart will join the Pirates pitching staff.
Ascanio, 24, was 0-1, with a 3.52 ERA in 14 relief appearances for the Cubs, and went 2-4 with a 3.16 ERA in 12 starts at AAA Iowa. Harrison, 22, has batted .327 this season in stops at Class A Daytona and Peoria.