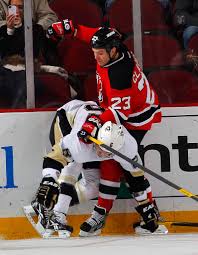 LATEST PENGUINS FREE AGENCY BUZZ
Preliminary talks between the Penguins and Pascal Dupuis are on-going but discussions are more in just the feeling out process at this point. No deal is imminent between the two sides. Dupuis, 34, has made his desire to return, but covets a four year deal and is in line to at least double his salary. Talks this week between GM Ray Shero and Dupuis agent Allan Walsh have been more of an information gathering period for the Penguins on what Dupuis is looking for. Pittsburgh has yet to make an offer but negotiations are expected to heat up in the coming days and into next week.
Dupuis has emerged as the Penguins top priority among their seven unrestricted free agents and no substantive talks have been held to this point with Jarome Iginla, Douglas Murray, Craig Adams, Matt Cooke, Brenden Morrow or Mark Eaton.
Among the Penguins restricted free agents, the team will tender defenseman Robert Bortuzzo and the Penguins are interested in discussing a two to three year deal with Bortuzzo this summer at a team friendly contract, similar to what they’ve done in the past with others in line for one-way contracts.
Decisions regarding the futures of RFA’s Tyler Kennedy and Dustin Jeffrey are said to remain up in the air, though both are likely to be qualified, sources say. Kennedy is due a $2.1 million tender to retain his rights. Discussions with Kennedy’s agent Steve Bartlett are expected to happen in the next couple days, a team source said.
Meanwhile, Dustin Jeffrey is unlikely to be a member of the Penguins next season, sources say, but that doesn’t mean the Penguins won’t tender him. The Penguins feel Jeffrey has trade value and can be a regular in this league, but they know it’s unlikely going to happen here. Pittsburgh is shopping Jeffrey going into draft weekend and I’m told not to be surprised if Jeffrey is traded. Jeffrey has not demanded a trade but seeks an opportunity to play elsewhere and be a regular in some teams lineup. Jeffrey is repped by Pat Brisson of CAA Sports who has a close relationship with Penguins GM Ray Shero.
Could all seven Penguin pending UFA’s hit the open market?
It’s something the Penguins have prepared for coming out of their pro scouting meetings if it comes to that, as Pascal Dupuis could end up being the only UFA the Penguins hold serious negotiations with prior to July 5th due to the demands of others and the Penguins ready to move on from a few others.
One thing that intrigues agents and teams is the 48 hour window (July 3rd – July 5th) where teams can talk to unrestricted free agents prior to free agency starting on July 5th.
It’s something the Penguins feel could benefit them and has them intrigued and give them a better chance to help sell players on Pittsburgh during the 48 hour window.
One player that certainly intrigues the Penguins is New Jersey’s David Clarkson who is expected to be coveted by 10 to 15 teams. I’ve heard that some in the organization see Clarkson as a younger Chris Kunitz from the standpoint of being a heart and soul player who brings it every night and can play anywhere in the lineup.
Clarkson made $3 million in 2013 and if the Penguins are unable to get something done with Pascal Dupuis prior to free agency, the team will be making a call into Clarkson.
League sources say Clarkson is seeking at least $4.5 million per season.