6 Years & Counting: Thank You to our subscribers, readers

On September 5, 2008 I launched Inside Pittsburgh Sports.com and today marks the sixth year anniversary of the site. Seems like it was 15 years ago.
As the site has hit six years old, I would like to send out a Thank You to all of our Subscribers who have been the backbone of our site from day 1. Some have come and gone but the support has been amazing, continues to be, and I can’t be more grateful.
Also a Thank You to current and past contributors/writers, my web designer Michael Verner of Verner Web Studio, and the local sports franchises who have been open minded about giving access to a non-traditional website like mine.
Out of college I borrowed money from my dad to build the site, business, with the mindset of developing a different, unique type of website and luckily it has turned into pretty much a full-time job, business, six years later. Without the initial wave of subscribers in 2008, 2009 to develop a base, that wouldn’t have been possible. That was also a time subscription websites weren’t the norm like they are becoming now. When the site hits 10 years, your subscriptions are on the “House”.
Running a subscription site is a lot like sales. There are good months and slow months. Stressful at times to keep it going during the slow months but what always drives me to improve the site daily isn’t the money, it’s the subscribers who committed to giving the site a chance years ago. 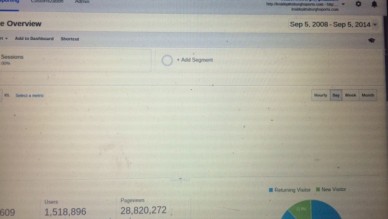 From a traffic standpoint we had our second most successful year (Sept 5 2013 – Sept 2014) with over 5 million page views and should top 30 million page views overall for the site before 2015.
Thank You again to our subscribers (new, current old), readers for the continued support, now six years and counting. Even a thank you to the ones who rip me all the time in the comments forum, yet, they pay to read the site, which I still don’t get 🙂