A Defense that has been wasted on a 4-4 team 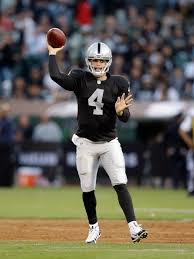 Remember when that Oakland Raiders game looked like a guaranteed win?

When the NFL schedule came out in April it was obvious to everybody that the Steelers had a tough one.

Six games in the division are never easy, including the two games with the Browns.

Then there were the trips to New England, Kansas City and Seattle and home games with the Broncos and Colts.

That home game with the Raiders on November eighth was one of the few games that got marked with a W.

The Raiders have a quarterback and they are looking every bit as much like a playoff team as the Steelers right now.

They beat a pretty good (so far) Jets team 34-20 on Sunday and Derek Carr threw for 333 yards with four touchdowns and no interceptions.

Latavius Murray had 113 yards on 20 carries and is averaging almost five yards per carry since coming into the league last season.

So, the Steelers’ defense isn’t getting a break this week

But then the Steelers’ defense hasn’t been the problem, has it?

Remember when everybody agreed that the Steelers were going to have to score at least 30 points a game to make the playoffs?

They scored 43 against the 49ers in week two but could have won if they had scored just 19 and 12 points were five more than they needed to beat the Rams in week three.

Would have beaten the Ravens in week four if they had scored 24.

Only needed 24 to beat the Chargers on the road in week five.

Twenty-five was 11 points more than they needed to beat the Cardinals in week six.

If there is an award for Defensive Coordinator of the First Half of the Season, it has to go to the rookie, Keith Butler.

It’s too bad that a lot of what he has done to this point has been wasted on a 4-4 team.

Obviously, that 30 points a game idea became unrealistic when Ben Roethlisberger left the Rams game with a knee injury.

But he played Sunday against the Bengals and again the defense did what nobody thought it was capable of doing in August. It shut down one of the best offenses in the league.

How does a wild card sound?

Forget the AFC North. If the Bengals go 4-5 in their last nine games, they’ll finish 11-5, which is the record it took for the Steelers to win it last season.

How do you like the Steelers’ chances of running the table in the second half and finishing 12-4 without Le’Veon Bell?

Which brings us back to the Raiders.

Remember December 2009, when the Steelers were coming off a Super Bowl and struggling with a 6-5 record and lost 27-24 to the Raiders at home?

He threw the last one with nine seconds left.

It was the moment when everybody knew it wasn’t going to be another Super Bowl year. The Steelers finished 9-7.

If the Steelers drop to 4-5, it might be the moment when we know that this isn’t going to be another playoff year.

And who would have thought that the Steelers would start the second half of their season depending on their defense to keep them alive?

Even without Bell the Steelers have enough offensive weapons to win but beating the Raiders looks like a much tougher proposition now than it did three months ago.

– If the Steelers don’t make the playoffs, it will mean they’ve gone five years without winning a post season game. They haven’t gone that long since before Chuck Noll showed up in 1969.

— Steelers safety Mike Mitchell did a nice job of proving that he’s as stupid as Pacman Jones on Sunday when he took a stupid taunting penalty.

— You can blame Ben Roethlisberger’s terrible game on rust, but where was the rust on the 80 yard, 7:14 TD drive on his first possession in four weeks? I think it was a bum knee more than rust.

— As usual, there is a lot of post-game discussion about Mike Tomlin’s clock management. The Steelers had enough time left in the final two minutes to put together a touchdown drive and failed.

– If you get a chance, check out Colin Kaepernick’s post game press conference after the 49ers loss to the Rams on Sunday. Check out his hat. Then try to imagine Ben Roethlisberger, after the loss to the Bengals, going with the same look. Not exactly the look of a leader of men.

So who is the butthead that got comments disabled on the Martin article?

I don’t come on this site to post my opinions. Instead I anonymously click on the “thumbs up” “thumbs down” icon by other people’s posts. Cool

If you wear black and gold and won a championship a decade ago the Yinzers will ignore the current results and boast about how important the glory days still are. I love Pittsburgh!

Did they win the championship last year? Since that was the premise to your original post and that not to mention that 4 of their 5 losses were to sub 500 teams including embarassing losses to the 2-14 TB Bucs who were the worst team in the league and an embarassing loss to the 4-12 NY Jets. Lets also not forgot the butt whooping loss to Balt in the WC game. It wasn’t a bad season by any means but it’s not a pretty damn good one either but as I said earlier, they won 7 years ago and won… Read more »

Big Overrated has been rusty since the Arizona SB. Ben’s the best football player in the NFL playing the QB position, but he’s not an elite QB. Year after year his decision making lets the team down. Think I’m hating? Just listen to every statement Big Overrated makes after a playoff loss …”That loss is on me … I didn’t do enough. ..I take responsibility.” He’s almost always right, having thrown multiple picks and taking unnecessary sacks. But why does it take Ben until after another loss with blood on his hands to realize he’s not elite. Just make the… Read more »

Evidently the Steelers did not have enough time to put together a TD drive in the final two minutes. There’s plenty of blame to go around, one of which is Tomlin’s time management mistakes.

Commentary seems pretty bad. Though the defense has been a bright spot. Steelers lack enough offensive talent to put up points when they are missing 2 pro-bowl offensive lineman, a top 3 NFL runningback, and Big Ben isn’t close to full strength.

Little jab at Kap at the end, random much?