What happened to all those meaningless NHL regular season games?

Hasn’t that been one of the big criticisms of the NHL, especially from the hockey haters who still think it’s a bunch of guys with no teeth fighting all the time?

The Penguins play one of those meaningless games in Ft. Lauderdale against the Florida Panthers, who just happen to be leading the Atlantic Division with 70 points.

The Penguins are in fifth place in the Metropolitan Division, 21 points behind the Washington Capitals, but they also go into the game in ninth place overall, which is one place away from being one of those too many teams that make the playoffs.

That’s been the other major criticism, mostly from people who don’t like and/or don’t get hockey.

I don’t know when the “home stretch” officially starts but the games being played now are every bit as important as the ones they’ll play when it does.

The Penguins are 28-19-7, which adds up to 63 points, one point behind the Islanders for eighth place, buy they’re also only two points out of third place in the Metropolitan, behind New Jersey and the Devils have played three more games.

But here’s another way of looking at the Penguins and most of the other teams fighting for the seven spots behind Washington: They’re two games over five hundred.

That 28-19-7 record means the Penguins have won 28 games and lost 26. Those seven overtime points that show up in the standings are for games that they LOST.

The Carolina Hurricanes, who lost to the Penguins in a shootout Friday night, are still playoff contenders even though they’re six games under .500 at 25-21-10.

The Detroit Red Wings are in second place, only three points behind the Panthers, but they’re only one game over .500 at 29-18-9.

Is there a mediocrity epidemic in the NHL with so many teams hovering around .500?

Finishing in a tie after 60 minutes of NHL hockey is an accomplishment. For a long time a tie was a tie and the one point just meant a tie and there was no loser.

But, with so many teams in contention for those eight playoff spots, getting that one extra point in overtime or a shootout is huge.

So, don’t let anybody tell you NHL regular season games are meaningless and don’t underestimate the importance of that 3 on 3 or shootout point.

One point in Ft. Lauderdale the day after Valentine’s Day could be the difference in whether the Penguins make the playoffs. 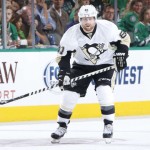 -So, what should Jim Rutherford do at the trading deadline? Should he make a blockbuster trade? Rob Rossi of the Trib said on last night’s Final Word on WPXI that Rutherford is looking to add another top six forward.

At what price? Who’s out there and what would he have to do to get him?

Maybe the Penguins could get Phil Kessel to help them down the stretch and in the playoffs.

I don’t mean the guy who came here in the trade with Toronto over the summer and has 16 goals. I mean the guy who was going to score somewhere between 35 and 50 goals playing with Sidney Crosby.

The guy wearing Kessel’s jersey now is on pace to score 23 goals this season.

The real Phil Kessel could do his general manager and his teammates a big favor by deciding to show up for the last three or four months of the season.

There isn’t a player out there with the potential to help the Penguins more than Kessel could by starting to put pucks in the net as expected.

Kessel’s effort has come into question a lot over his career but I don’t think anybody could accuse him of not trying hard enough in Pittsburgh.

Sidney Crosby showed everybody how fast a world class player can turn his game around and carry his team.

Kessel is one of the best goal scorers in the world. If he, Crosby and Evgeni Malkin can stay healthy and play at the top of their games, the Penguins are good enough to make a long playoff run.

Assuming, of course they win enough of these meaningless games to get into the playoffs.

—Las Vegas has the over/under for Pirates wins at 87. I’d have to bet the under right now.

Remember, the difference between the 98 wins last season and 86 this season would be one less win every two weeks.

Maybe the Pirates will make up for the home runs they lost with Pedro Alvarez and Neil Walker [hide] and maybe Ryan Vogelsong will be the next Edinson Volquez, I just wouldn’t bet on it.

Pirates fans should take some consolation in the knowledge that, as pitchers and catchers get ready to report, this team is a lot more likely to have continued success than the team whose three year run ended with that single by Francisco Cabrera.[/hide]

We need Dejan to tell us how great Kessel is

Anyone else starting to think that Plotnikov likely got caught banging “Sully’s” wife?

I see you and Sully have become closer . Coach Sully

It’s in quotes because you call him that – because you have a lil crush. Totes adorbs, sam.

It should rev up again when Sid is back from PTO. Just not sure when that is.

just another meaningless nhl regular season game without a write up.

Kessel is a giant bag of shit. Phil why dont you take the puck wide and drift into the RW board one more time.

That chubby will be traded once more and be on his 3rd team under same contract. Thank hot leafs are taking 1.2m of Kessel’s contract. Imagine they didn’t. I would’ve been one expensive fraud on this team

Stanch, that’s why you need your goalie to make trimely saves and keep the game close. Pens get a point because Fleury stopped the pucks he should.

Or is that why your defenseman shouldn’t turn the puck over 7 feet in front of the net? You’d blame the goalie. I have this weird savvy ability to realize other people play too. You should give it a whirl. Just to try something different.

Just saying he seems to have settled down since coming out rough after the Allstar break.

Attention restaurant customers. Testicles. That is all.

Fleury could’ve take the rest tonight since they will need him more end of the season. Sully could’ve used jerkoff vs Montoya

Not sure Zatkoff would have been able to bail out French pusssy Letang there.

I’d try Kessel-Crosby-Kunitz, then Hornqvist-Malkin-Hagelin. Give Kessel a shot with Sid again now that you have a coach who lets them play. This balances the lines with a grit player and speed player on the wings of your 2 superstars.

If I were looking to add one player, I’d see what Grabner would cost. Shouldn’t be much. Add more speed and he can play up and down the roster.

I’ve mentioned that on other boards. He’s not really too good but that speed lol

I did too- the cost wouldnt be extreme and he adds depth and kills penalities.

Having Crosby, Malkin and Letang healthy for the remainder of the year is the biggest need IMO. The Malkin, Kessel, Hags line looked dangerous every time they hit the ice. Then, as usual, a bunch of injuries happen and it becomes a one line team.

Also JOHN, you tend to focus on the HR’s that will be lost (something like 35%), which I am not going to say will be easy to over come. But you are also removing the top 2 swing and miss bats from the lineup as well. If Pedro was a traditional HR guy when it comes to RBI’s it may concern me more, but (through no fault of his own) majority of his HRs were solo shots. Feel like a doubles/gap hitter will produce more RBIs, but we will see.

The downgrade at starting pitcher is the bigger concern anyway. But truth be told, on paper at least, they downgraded across the board on opening day. Sure, you might have a Glasnow ready later in the year, but there’s not even a guarantee that him being “ready” yields the results that you hope for. Giving this offseason anything above a D would be foolhearty and disingenuous.

The Pirates offseason has sucked overall. But I wouldn’t say they downgraded across the board. I think Jaso is an upgrade over Pedro. Harrison is an upgrade over Walker. Kang is an upgrade over ARam. So the infield improves and the outfield remains the same. Taking a hit is bench depth with the players above now in the everyday lineup. The bullpen remains impressive, although a 2nd lefty would be nice. There is really only one reason this offseason sucked: the starting rotation is disgusting. Ryan Vogelsong should not be counted on as anything more than depth, and We know… Read more »

Even if you believe all of that, which I’m not sure I do, their bench is also weaker. There wasn’t a lot of “holistic upgrading” going on this offseason. Deplorable.

how many years in a row do we have to hear the cliche “best deadline aquisition would be “pens player: playing like “pens player” should. Feel every year the best help is coming internally or some player getting healthy…

Sam and Yoda also gang up on the other mentally handicapped kids at daycare in Mario Kart Double Dash. A pretty solid team.

so once again pens need to add another Forward .so this team don’t need a defense .Once again this team will fail to go far in playoffs with this EA NHL16 mindset

In summary:
– Kessel sucks
– Kessel can fetch a healthy return to make this team better

I would sign retired Martin St. Louis just to trade his rights, given that logic.

Pirates suck and BN is a cheapskate carpetbagger.