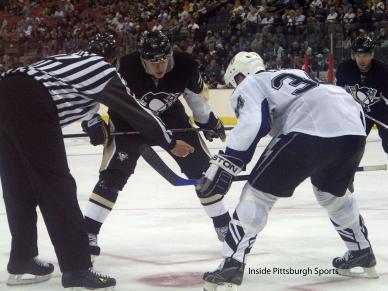 Malkin officially off the left point? I‚Äôve been told the Penguins will go into tomorrow‚Äôs game with a unit of Bill Guerin ‚Äì Sidney Crosby ‚Äì Evgnei Malkin down low on the power play. The same unit they worked on in Tuesday’s morning skate but didn’t use it until late in the third period. The Penguins did not work on their power play in today‚Äôs practice but will do so in tomorrows morning skate. The exact reason the team continues to play Malkin at the left point remains to be seen but Crosby likes to play the top of the right side and doesn‚Äôt want to play the left point. Look for Crosby to move down low tomorrow and Malkin to play the top on the right side for one-timer opportunities. Malkin is the Penguins top offensive player and they have to utilize his strength as a shooter on the power play.
NFL Draft Buzz: Steelers scouts and coaches have been busy this week. Representatives from the team attended Georgia Tech‚Äôs, Western Michigan‚Äôs, Auburn‚Äôs and Utah‚Äôs pro day workouts. At Georgia Tech‚Äôs Pro Day the Steelers had their eye on defensive end Michael Johnson and Offensive Tackle Andrew Gardner. According to NFL.com, Johnson measured in at 6-foot-6 7/8 and 266 pounds, and he had 40-yard dash times of 4.61 and 4.64 seconds. He did 23 repetitions on the bench press at 225 pounds, and he turned in a time of 7.42 seconds in the three-cone drill. Gardner measured in at 6-6 1/4 and 305 pounds, ran the 40 in 4.99 and 4.96 seconds. He had a 30 1/2-inch vertical, an 8-11 broad jump, a 4.70-second 20-yard shuttle time and a 7.51-second three-cone drill time.
A source tells me the Steelers came away impressed with Auburn Cornerback CB Jerraud Powers and guard Tyronne Green at their pro-day
Big pro-day coming up for Penn State wide receiver Derek Williams. He was a disappointment at the combine and Deon Butler could pass him up on some teams draft boards.
Kevin Colbert has only ruled out Quarterback, running back and tight end in the first round. I‚Äôve been told if
North Carolina wide receiver Hakeem Nicks falls to the Steelers at 32, they will make a surprise selection. Nicks is one of the rare receivers in this draft that the Steelers see as a long-term replacement for Hines Ward.
Steelers sign Colon to one year deal: Pittsburgh Steelers right tackle Willie Colon officially signed his one year tender today worth $2.12 million. The Steelers are open to signing Colon long-term. Mike Tomlin is very high on Colon. Colon and Darnel Stapleton have been enjoying the Las Vegas scene this off-season with star quarterback Ben Roethlisberger as the trio has been seen together at various night spots.
Panthers to rest Levance Fields: The Pitt Panthers may limit point guard Levance Fields during the Big East Tournament as he has been bothered by a groin injury.
Monroe hits third homer of the spring: Pittsburgh Pirates outfielder Craig Monroe hit his third home run of the spring this afternoon in the Pirates 2-2 tie. Monroe who is in camp on a non-guaranteed contract has locked up a roster spot. Manager John Russell has spoke very highly of Monroe throughout Spring Training.