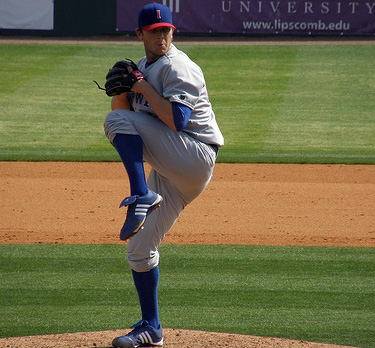 By John Perrotto
The Pirates wanted the equivalent of two good prospects in order to give up left-handed reliever John Grabow.
Their rationale was that they could hang on to him for the rest of the season, offer him salary arbitration, let him walk as a free agent and collect two compensatory draft picks since Grabow will be classified a Type A free agent in the Elias Sports Bureau statistical rankings.
By throwing in Class AAA Indianapolis left-hander Tom Gorzelanny into a trade with the Chicago Cubs on Wednesday, the Pirates feel they got three good prospects back in right-handers Kevin Hart and Jose Ascanio and infielder Josh Harrison.
Hart will move into the Pirates’ rotation while Ascanio will go to Indianapolis and Harrison will report to high Class A Lynchburg.
“It was yet another opportunity to add more quality players to our organization, both at the major-league and minor-league levels, and I felt it was a really good deal for us,” Pirates general manager Neal Huntington.
What Huntington didn’t say but the Pirates felt is that Grabow wasn’t going to come back next season and they had also determined Gorzelanny was never going to regain his 14-win form of 2007 in a Pirates’ uniform.
Thus, the Pirates got three players back for two expendable ones.
Hart, 26, is the centerpiece of the deal as was rated as the Cubs’ sixth-best prospect by Baseball America coming into the season.
He was 3-1 with a 2.60 ERA in eight games, four starts, with the Cubs after starting the year at Class AAA Iowa and beat Houston on Thursday afternoon at Wrigley Field.
Hart has a good sinking fastball in the low 90s along with a plus
curveball, solid slider and inconsistent changeup. If Hart does not work out as a starter, the Pirates feel he could pitch at the back end of the bullpen.
Ascanio, 24, has spent part of the past three seasons as a reliever with the Atlanta Braves and Cubs. However, the Pirates want to look at him as a starting pitcher because of a four-pitch arsenal that includes a four-seam fastball, slider, changeup and sinker.
Harrison, 22, was the Big East Co-Player of the Year last season at the University of Cincinnati and has the versatility to play second, base, third base, shortstop and the outfield.
The Pirates think he profiles best as a second baseman and are impressed with his athleticism as he hit a combined .327 with five home runs, 42 RBIs and 26 stolen bases in 97 games with the Cubs’ full-season Class A Peoria and Daytona farm clubs this season.