As good as they are, young Penguins still have much to learn 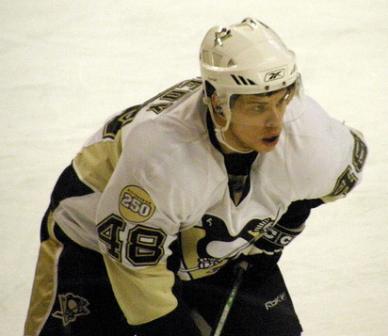 By Paul Ladewski
The Stanley Cups Finals aren’t Boys versus Men exactly. After all, every Penguins player except Jordan Staal can down an Iron City legally.
But if the 5-0 embarrassment in Game 5 in Detroit confirmed anything , then it’s that they still have lessons to learn before they can move up to champagne.
The Red Wings were a tired bunch in Game 4 – even their head coach Mike Babcock said so — and with only one day off between games, the Penguins were in position to take advantage of their fresher legs and healthier bodies.
Maybe the visitors felt a bit too good about themselves after consecutive victories at home. Or maybe they believed that momentum would carry over automatically from the previous game.
Whatever the case, they displayed a serious lack of focus and discipline that allowed the Winged Wheels to seized control of the series and get their legs back again.
Then again, if you had the manpower advantage for nearly one-quarter of the game, you wouldn’t be pooped out, either.
The Red Wings totaled 14 minutes of power-play time – 12:18 at 5-against-4 and 1:40 at 5-against-3 – and scored three times in the process.
See, similar to last spring, that’s the fundamental problem that the Penguins face here. As much as this team has grown up in the last year, it goes only as far as Staal, 20, Sidney Crosby, 21, Evgeni Malkin, 22, Kris Letang, 22, and Marc-Andre Fleury, 24, take it on most nights
. It’s a lot to expect a bunch of kids only a few years removed from driver’s ed to hoist the Stanley Cup, which history tells us is a job reserved for men who can actually grow beards.
In that regard, the Red Wings represent an awful matchup for any core group that lacks postseason experience. They feed off young opponents like Jaws did human limbs.
If the Penguins players and coaches had reviewed the game films of the Western Conference finals, they would have been reminded of as much.
In Game 4, the Chicago Blackhawks had the Red Wings right where they wanted them. The Red Wings were without perhaps their two best players, as defenseman Nicklas Lidstrom was a late scratch because of a lower-body injury and center Pavel Datsyuk was sidelined because of a sore foot.
The Blackhawks had the confidence of a Game 3 victory and
a raucous crowd on their side.
Then the Blackhawks did what inexperienced teams often do against playoff-savvy ones – they forgot what made them successful.
After the home team spotted the Red Wings a 2-0 lead, it became more intent to beat them physically than on the scoreboard. The result was a 6-1 humiliation in front of a national television audience.
Sound familiar?
The Red Wings have young guys, too. The difference is, Justin Abdelkader, Darren Helm and Jiri Hudler pay their dues on the third and fourth lines while the wise, old heads lead the way.
Lidstrom, Kris Draper, Tomas Holmstrom, Chris Osgood and Brian Rafalski may be geezers, but they’ve been in a few rodeos together.
And unless a player has been through the postseason stress test more than once, the 30-somethings will tell you, he has no idea what it takes to survive it.
At least the Penguins have been here before. One year ago, they faced a similar win-or-go-home situation the sixth game.
Once again, they’ll have certain physical advantages. Plus, they’ll have the locals behind them. Whether or not they have the intangibles necessary to stay alive, well, that’s another question entirely.