As Pirates begin annual free fall, Huntington is in no hurry to callup top prospects 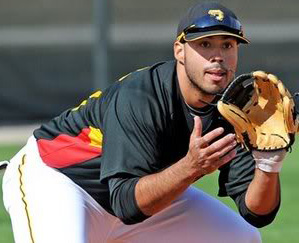 Alvarez will be compared to Buster Posey for years to come
Memorial Day is around the time where teams begin to callup their top MLB ready prospects as the arbitration deadline is past.
Last year Baltimore’s Matt Wieters and Pittsburgh’s Andrew McCutchen were prime examples.
This year has seen the same trend as San Francisco called up top prospect Buster Posey (No. 5 overall pick, 2008) this past week and Washington Nationals pitching phenom Stephen Strasberg will make his MLB debut against the Pirates next week.
As the Pittsburgh Pirates (20-31) have begun their annual free fall in the standings, losing 5 straight and 9 of 11, GM Neal Huntington has no plans to recall any of the Pirates top prospects, including 2006 1st round pick Brad Lincoln who is coming off of another solid performance Friday night against Charlotte.
“Brad is still a ways away from being major-league ready, ” Pirates GM Neal Huntington said on his weekly radio show Sunday morning. “Need isn’t a reason to promote a prospect,” Huntington added, pointing out that the arbitration deadline has now passed and has no impact on the Pirates keeping Lincoln in the minors.
Those close to Lincoln including his teammates believe Friday night’s start against Charlotte was going to be his last with the Indianapolis Indians as speculation has been rampant that Lincoln would be called up this week.
Lincoln (5-2) did his part, pitching 5 shutout innings, surrendering just 1 hit, 1 walk and struck out 7 in a no decision.
Scouts indicate Lincoln would immediately become the Pirates best pitcher on their staff and the growing consensus is that he’s ready but the Pirates continue to take a patient approach.
Huntington has stated he wants Lincoln to improve his 3rd and 4th pitches, including his change up.
As for outfielder Jose Tabata and third baseman Pedro Alvarez, neither is close to being called up, according to Huntington.
Tabata, is batting .313 on the season with 2 home runs and 17 RBI’s. Tabata also has 20 stolen bases.
Alvarez, the Pirates premier prospect, is hitting .261 with 11 home runs and 44 RBI’s. Alvarez’ power numbers have been impressive but the Pirates want to see more improvement against left handers before a callup will be strongly considered.
Unlike Lincoln, scouts believe Alvarez needs a bit more time in the minors.
Alvarez development is a step below Buster Posey (23 years old) at this point, who Alvarez is going to be compared to for years to come. The Pirates decision makers were set to take Alvarez or Posey with the No. 2 overall selection in the 2008 draft. The Pirates zeroed in on Alvarez who possess better power.
Posey hit .349 with Fresno (AAA), adding 6 home runs and 32 RBI’s in 47 games played.
Posey was recalled on May 29 and is 6-for-9 in two games, batting .667 with 4 RBI’s for the San Francisco Giants.
What the Pirates want to see out of Alvarez over the next 2-3 weeks is to dominate at the Triple-A level like Posey.
Alvarez had a 4 hit game on Thursday night and is batting .324 in his last 10 games, despite an 0-for-5 performance Sunday afternoon.