As playoffs inch closer, Bylsma looking for Letestu-Kovalev to hit their stride together 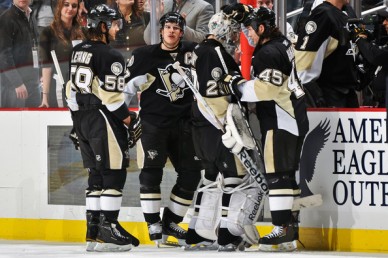 DePaoli’s Latest Pens Buzz
Dan Bylsma not only believes that the return of Mark Letestu will be a boost for the Penguins in the face-off circle but Bylsma also see’s Letestu as the best fit for Alex Kovalev.
“I think the best player on our roster to gel with Kovalev is Mark Letestu, ” Bylsma said today. “It’s a bit on how he supports the puck…
but also his intelligence of the game, reading situations and knowing where to be. That allows some chemistry to build. ….Hopefully in the next six games we can get them to hit their stride.”
Based on Bylsma’s comments, he intends to give Letestu and Kovalev an extended look going into the playoffs.
The two have shown glimpses of chemistry during their time together.
Top-6 coming into focus
Even with the Philadelphia Flyers coming into town, Dan Bylsma will stick with his top-6 of Brook Orpik – Kris Letang, Paul Martin – Zbynek Michalek, Matt Niskanen – Ben Lovejoy, while Deryk Engelland will be a healthy scratch for the second straight game.
Moving forward, the top-6 is starting to come into focus. Engelland – Lovejoy has been a back and forth situation for sometime but things are finally moving into Lovejoy’s direction on a fulltime basis as the Penguins believe his style fits better than Engelland’s at this time of the year.
As for Matt Niskanen, he will remain locked in a 3rd pairing role due to his ability to play the left side. That’s something the Penguins even looked into before acquiring him. That gives him a big edge to stay in the lineup on a nightly basis.
Plenty of Options for top line if Crosby returns
As Sidney Crosby continues to show steady improvement on a daily basis, it’s hard not to look a little bit to the future on what the top line may look like if Crosby were to return at somepoint in the first round.
Some pressing questions for Dan Bylsma that I’m sure he hopes to have in a few weeks:
1. Kunitz to play with Staal or Crosby? – The Chris Kunitz – Jordan Staal – Tyler Kennedy unit has been excellent of late and Bylsma will be hard pressed to split them up if they keep it up.
However, the Penguins love how Kunitz and Crosby fit together and it’s not a foregone conclusion that Crosby would center James Neal over Kunitz. Bylsma even hinted at that a few weeks back when he was asked if he’s looking forward to seeing Neal and Crosby play on a line at somepoint in the future.
Bylsma responded by basically saying, who said Chris Kunitz won’t be in that spot on Sid’s left wing.
2. Do you throw Sid right back into the mix with two new linemates? – There is obviously some intrigue on how Crosby would fit with James Neal on his left wing and Alex Kovalev on his right wing.
But, would this be a good option in a playoff series, if the line had no previous time together? I say, yes, but not sure the coaching staff will feel the same way.
3. Kovalev or Dupuis? – It would be a major disappointment if Crosby returns and does not see significant time with Alex Kovalev. Kovalev’s the best playmaker Crosby would get to play with since Marian Hossa. And when Hossa was around, Crosby wasn’t the type of goal scorer he has evolved into.
The one player in Kovalev’s way to play with Sid could end up being Pascal Dupuis who the staff likes on Crosby’s right wing due to his ability on the forecheck and speed to the outside.