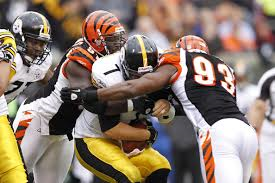 Whenever you listen to Mike Tomlin speak, you can count on a few of his favorite clichés.

“Their play was ‘above/below the line’ this week” is one of them.

“Next man up” &/or “The standard is the standard” are a few more.

In fact, “the standard is the standard” is so often employed as a team credo by Tomlin, it was even bolted up on the walls of the Steeler’s locker room.

But those catch phrases came into direct contrast with one another as the coach assessed his team’s Sunday loss vs the Bengals.

When I asked Tomlin on Tuesday about his offensive line play Sunday, he said “I thought they were above the line in the running game and the passing game. Not perfect by any stretch. But I think they represented themselves well and are doing a nice job in finding the necessary continuity given some of the adversity that they’ve faced.”

Really? What line were they above exactly? Ben Roethlisberger was sacked three times. Hit three more times. Pressured many others. The line allowed six tackles behind the line of scrimmage. Aside from a 55 yard run from DeAngelo Williams, the running backs managed just 3.3 yards per carry on the other 18 attempts.

If the “standard is the standard”, I kind of thought the standard was set last year. When Roethlisberger had all day to throw. When Le’Veon Bell had vast expanses of space to run through. That’s a high standard to live up to.

And this line wasn’t up to it. Not on this day anyway. Probably not last week in Kansas City either. And how could it be? Two of those guys are gone. Kelvin Beachum and Maurkice Pouncey are hurt. How can that unit be at that line, let alone above it?

So is Tomlin’s “line” actually on a sliding scale? Is the “standard only the standard” if the standard players are playing? That doesn’t say much for “next man up” does it? The nature of that saying is to suggest the next guy on the depth chart is supposed to be as good as the starter. Because “starter in waiting” is another Tomlinism I believe I’ve heard before.

Cody Wallace and Alejandro Villanueva aren’t bad. But they aren’t Pouncey or Beachum. Although by the alleged Tomlin “standard” they should be, right?

By comparison, look at how he answered a question about if his defense was “above the line”.

“At times,” Tomlin responded before praising the defense. But he then further couched that congratulations by adding: “But we didn’t come out of the stadium with the win.”

At times?! Wait a minute. At times?! This defense is sixth best in the league in points per game. This defense just held a Bengal team with numerous skilled offensive players to 16 points. Yeah, I know. The unit allowed the two biggest third downs of the game on a pivotal fourth quarter drive. However, they were 9-of-11 on third downs at one point prior to that.

But that “standard” isn’t good enough? Hell, that standard is a helluva lot closer to the ’76 “Steel Curtain” Steelers than the “shower curtain” of recent seasons. But now Tomlin isn’t satisfied?

And oh by the way, you’re missing starters on that unit too. No Stephon Tuitt. No Will Allen. Frankly, way too much Antwon Blake.

Who…by the way…is another inefficient player that Tomlin defended this week.

So let’s just state it flatly. When Tomlinisms collide, consistency loses. “The standard is the standard” depending on who is setting the standard and at what time. “Next man up” sounds good. But it means nothing. The “line” slides. And whoever is above or below it depends on the circumstantial evidence.

The platitudes are starting to ring as hollow as a coach’s record that is absent of a playoff win since 2010.To read this insider news, subscribe to get “Inside Access”!

These past drafts keep looking better and better

Tomlin is a charature. The guy couldn’t X and O his way out of a parking lot.

It’s funny how easily a completely factual article can ruffle the panties of those in Yinzer nation. Nothng, not one thing Tim said was incorrect but yet everyone attacks his writing and bashes the topic.

Instead of actually breaking down the game, we just want to beat a dead horse with another article criticizing “tomlin-isms”?

Bring back the old site format.

You people, Benz included, overanalyze this stuff waaayyyyy to much. Very rarely does Tomlin publicly criticize his players. You expect him to say “they stunk, but then again they should have stink because 2 starters are out”?

Personally I find it funnier when Yinzerisms collide. DB was run out of town because his championship in 2009 no longer counted as an exceptable accomplishment and was not justification for his staying because the underachievements made the championship irrelevant even though over the next 5 years they had 5 straight playoff appearances, 2 division titles, 4 playoff series wins and a CF appearance but yet in the last 5 years Tomlin has 2 playoff appearances, 1 division title and zero playoff wins but his title in 2009 is still considered a relevant accomplishment that should justify why the underachievments… Read more »

The big difference between the Pens and Steelers is the level of expectation based on player talent. Rothlisberger is one of the better QBs in the game, and players like Bell and Brown are currently elite. If you look around the league though, there are a plethora of teams that have cores (offense and defense) that are competitive or better than what the Steelers can field. You’d expect Tomlin to have them in the playoff hunt – and they usually are. With the Pens, Crosby has been the best player in the game. This has been the consensus among most… Read more »

I completely disagree AGKM, you’re defending the Steelers by saying they have elite players but other teams have elite players as well but then using the same criteria as why the Pens to justify when the Pens underachievments have been unjustified. With the exception of the 2013 season, you can look at ever nhl season and saw that teams like Bos, Chic, LA among others have rosters equally as talented as the Pens even if the don’t have a player equal to Crosby. In the sincerest way possible I call that answer utter BS, the Steelers lack of success is… Read more »

With the exception of 2013, the Pens weren’t beaten by the Boston, Chicago, LA’s of the league. There’s just no way to sugarcoat that this group has consistently under-performed to inferior teams. I don’t know, maybe you have a higher view of the talent in the Steeler organization. As I said, there are some select individuals who are very good players and I’m not going to say otherwise. Roethlisberger is a darn good QB, but put his career next to Peyton Manning, Tom Brady, etc. Turns out there are better players around – and those are the guys he’s playing… Read more »

Right. I’m creating “justifications” and “defending” the Steelers by saying that they’re simply not good enough right now to justify Super Bowl expectations. Seriously, who was picking them to win it this year? Were they even odds on favorites to win the division? You don’t seem to understand the difference between Barry Foster and Barry Sanders. One was at one point in time “among the best players at his position”. The other features prominently in the discussion of the best player ever. It’s a crying shame to all of sports and a knock on the organization that the Lions could… Read more »

It is a justification when it used 1 way for 1 team and a different way for the other team, first yes there were many people picking the Steelers to win the division and compete for the Superb owl but that is really irrelevant to the discussion when we are talking about what they actual are and what they are actually capable of as opposed to what people perceive them to be. Just because the media thinks they will be good doesn’t mean the talent is actually there to truly be good, media and fan bases are often swayed by… Read more »

The real shame is that most will bash what is a very well written and factual article written by Tim because Tomlin won a SB going on 7 years ago.