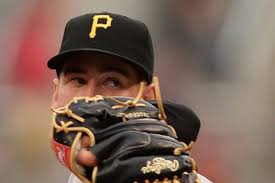 Pirates starter Brandon Cumpton (0-1, 3.38 ERA) allowed 7 hits and 1 earned run in six innings pitched, leading the Pittsburgh Pirates (23-27) to a 5-3 win over the New York Mets on Monday afternoon. Pittsburgh has won six of eight games.
All Cumpton does is pitch well when he’s given a shot at the Major League Level.
Cumpton who has replaced the recently released Wandy Rodriguez in the rotation, is now 2-2 with a 2.70 ERA, 0.99 WHIP in 7 career starts (43.2 IP).
Two things the Pirates like about Cumpton is that he doesn’t walk batters and doesn’t give up the long ball.
He has walked just 2 batters in 18.2 innings pitched this season and has 31 strikeouts to just 6 walks in 43.1 career innings pitched. Cumpton has allowed 1 home run in his MLB career.
Cumpton’s ability to throw strikes has been a trend also in the minors.
He walked 49 batters in 131 innings combined in 2013 with Double-A Altoona and Triple-A Indianapolis. In 2012 with Altoona, Cumpton walked just 46 batters in 152 innings.