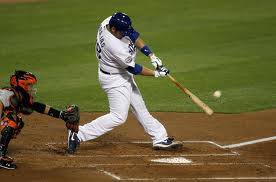 By John Perrotto
The Pirates’ approach to free agency has seemingly forever been to wait until later in the offseason then try to find bargains.
They went against the grain Thursday, though, by signing veteran catcher Rod Barajas to a one-year, $4 million contract. The deal also includes a club option worth $3.5 million in 2013 but contains no buyout clause.
Barajas said his agent heard from a number of teams but the Pirates were clearly the most interested.
“They were aggressive,” Barajas said. “They gave me the feeling they really wanted me to be a part of their team. They played good baseball for four months last season and showed a lot of improvement. I think we’re going to better next year. It just seemed like a really situation to be in.”
Indications are that the Pirates are also aggressively pursuing two other free agents–shortstop Clint Barmes and Hisashi Iwakuma, a right-handed starting pitcher from Japan.
The Pirates had a glaring hole behind the plate after deciding not to exercise the options in the contracts of catchers Ryan Doumit and Chris Snyder last week, making them both free agents. Thus, the Pirates moved to fill the catching void quickly and decided Barajas was their man in a thin catching market, especially in light of the fact they would have had to give up their second-round draft choice as compensation for signing Ramon Hernandez.
Barajas, 36, hit .230 with 16 home runs and 47 RBIs in 98 games for the Los Angeles Dodgers last season. He also had a .287 on-base percentage and a .430 slugging percentage, which ranked seventh among National League catchers with at least 300 plate appearances.
Barajas has averaged 17 home runs a season over the last three years, meaning he should help the Pirates, who finished 14th in the 16-team NL in runs scored last season. However, the Pirates also like the idea of a 13-year veteran handling a staff on which many of the pitchers are still trying to establish themselves as dependable major-leaguers.
“He has the combination of attributes we’re looking for, an experienced catcher with the willingness to help improve a young pitching staff and he also adds some power to the lineup,” general manager Neal Huntington said.
Barajas is not without his flaws.
The Dodgers actually had a slightly higher ERA last season when Barajas caught than when he didn’t, 3.57-.350. He also threw out just 16 percent of baserunners attempting to steal (14 of 80). Furthermore, Barajas has played in as many as 100 games in each of the last six seasons and hit just .214 against right-handed pitchers in 2011.
Yet with the pool of quality catcher around the major leagues shallow, the Pirates felt Barajas was better as their starter than Doumit, Snyder or internal options Michael McKenry and Jason Jaramillo.
Adding the option year without a buyout to the contract also buys the Pirates time–at no cost– in case prospect Tony Sanchez isn’t ready to be the starting catcher by the start of the 2013 season.
“The one thing you love to see when you look across the field is a team having fun and the Pirates had a fun attitude last year,” Barajas said. “You want to be able to work in an environment like that. I feel I have a pretty good handle on handling a pitching staff and working with young pitchers. I think just by being someone who has veteran status and has been around for a long time that I can help a younger team. I’m really looking forward to it. It’s going to be fun.”