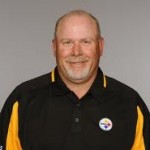 So called retirement for Bruce Arians lasted no more than a week.
Arians has agreed to become the new offensive coordinator with the Indianapolis Colts, according to a report from ESPN. The report states that Arians is scheduled to fly to Indianapolis on Monday and sign the contract. He is currently at the pro bowl with Steelers quarterback Ben Roethlisberger.
Arians was the Colts quarterbacks coach from 1998-2000, working with Peyton Manning in his first three seasons. Arians likely won’t be working with Manning this time around as many expect the Colts to release Manning in March due to a $28 million signing bonus being owed to the star quarterback.
Arians though figures to be coaching a potential franchise quarterback in expected first overall pick Andrew Luck. Luck has been regarded as one of the best quarterback prospects since John Elway.
Just eight days ago, the Steelers announced Arians had retired but it quickly became known that Arians was pushed out the door by Team President Art Rooney II as the Steelers decided not to renew Arians contract.
He was the Steelers offensive coordinator from 2007-2011 and had been a member of the Steelers coaching staff since the 2004 season.
Pittsburgh ranked 12th in total offense in 2011 but were a disappointing 21st in scoring.