Can Johnson turn back the clock one more time? 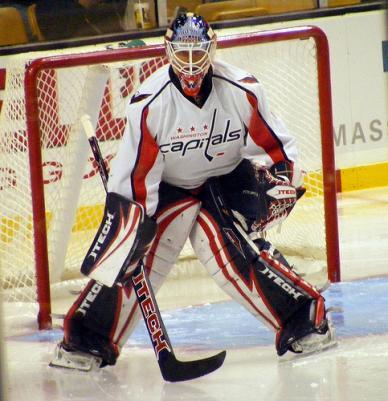 By Paul Ladewski
The Pittsburgh Penguins signed back-up goaltender Brent Johnson to a one-year contract worth close to $530,000 today.
It remains to be seen how this will turn out, but if the 32-year-old veteran can turn back the clock for even a few games, then the Penguins have got themselves a steal.
It was Johnson who dropped jaws in the first round of the 2002 Stanley Cup playoffs.
I know, because mine was one of the ones that had to be picked up off the dressing room floor after the St. Louis Blues netminder shut out the Chicago Blackhawks in not one, not two but three consecutive games, In his first season as a starter.
At a $550,000 salary, Johnson did the impossible — turned Frank McCool into a household name.
Fifty-seven years earlier, the Toronto Maple Leafs goaltender had been the last goalie to pitch three shutouts in a row.
“I’m having a great time,” I can still remember Johnson tell the media after a 1-zip victory in the fourth game. “It’s a blast. That’s pretty much all I can say.”
For the Blackhawks, the series was as much fun as a nail in the eye. Head coach Brian Sutter did everything except kidnap the Blues goalie. He changed lines. He even changed goalies. Didn’t matter.
Before the Blackhawks finally scored early in the second period of the fifth game, Johnson had not allowed a goal in three hours, 26 minutes, 45 seconds.
Three hours, 26 minutes, 45 seconds? C’mon, Jennifer Anniston doesn’t keep a boyfriend that long.
What impressed me more even than “The Streak” was the way that Johnson handled adversity and pressure.
After the Blackhawks took a 3-1 lead, he stoned them the rest of the rest of the way. Or long enough for his team to rally and win the game and the series.
Earlier in the season, Johnson reeled off 10 consecutive victories. And he wore the same suit to and from every stinkin’ one of them.
Even though Johnson lacked the consistency to become a go-to guy, he put up decent numbers along the way – 2.63goals-against average, .903 save percentage.
He was traded to the Phoenix Coyotes, then the Washington Capitals claimed him on waivers during the 2005-2006 season.
Johnson, 32, played 21 games with the Washington Capitals last season, finishing with a record of 12-6-2 during the 2008-09 season. The veteran goaltender recorded a .908 save percentage along with a 2.81 goals-against average.
If not for hip surgery last season, Johnson might have been in the nets against the Penguins in the playoffs.
If I’m general manager Ray Shero, then I have only one piece of advice for him.
Pack one suit, max.
*Based in Chicago, award winning columnist Paul Ladewski is a contributor to Inside Pittsburgh Sports, covering the NHL