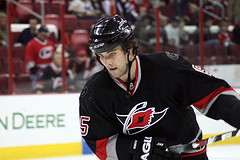 Pittsburgh leads series, 2-0
The Carolina Hurricanes and Pittsburgh Penguins are going through their early preparations as both teams prepare for game 3 of the Eastern Conference Finals Saturday night.
The Penguins accomplished what they wanted to in game 2, setting the tempo and playing aggressive in the offensive zone.
Pittsburgh managed 42 shots on goal and dictated the play by countering the Hurricanes aggressive forecheck with a quick moving transition game.
Canes look to shutdown Crosby, Malkin
A major concern for the Hurricanes is finding a way to slow down Sidney Crosby and Evgeni Malkin.
The Hurricanes do not have the personnel to shutdown Crosby, Malkin and look for them to make some adjustments on defense such as trying to clog the middle, being aggressive at the blueline and forcing the Penguins superstars to the outside.
The Canes have talked about how they are giving Crosby, Malkin too much space.
Crosby, Malkin torched the Hurricanes for 6 points combined in game 2.
Home Crowd Factor
Returning home, Carolina will look to build off of the home crowd and get out to a early lead. Carolina has only lost 3 times at home in the past two months.
For Carolina to make it a series tonight, they will need a strong performance from Eric Staal. The Penguins have neutralized Staal and for the Hurricanes to have any hope of winning both games at home, Staal will need to be much better than he has been.
Morning Skate Update

Carolina Hurricanes
The Hurricanes took the ice first this morning and they will likely have a healthy squad for tonight’s game.
Eric Cole is showing no effects of his knee injury he suffered in game 1 and Tuomo Ruutu skated in today’s morning skate.
Ruutu’s skating does not look 100% but his mobility and lateral movement look good enough to give it a go for tonight’s game according to sources.
Based on the morning skate, the Chad LaRose will remain on Eric Staal’s line.

Pittsburgh Penguins
The Penguins just concluded their morning skate. The team went through a light workout and as always worked on the power play. My source on the scene tells me he spoke to Pascal Dupuis this morning and Dupuis indicated to him that he has been told he will be in the lineup tonight.
Dan Bylsma has indicated following the morning skate that he will make a game time decision on the lineup but indications are right now he is leaning towards dressing 6 defensemen.
Lines in the morning skate
Kunitz – Crosby – Guerin
Fedotenko – Malkin – Talbot
Cooke – Staal – Kennedy
Dupuis – Adams – Satan