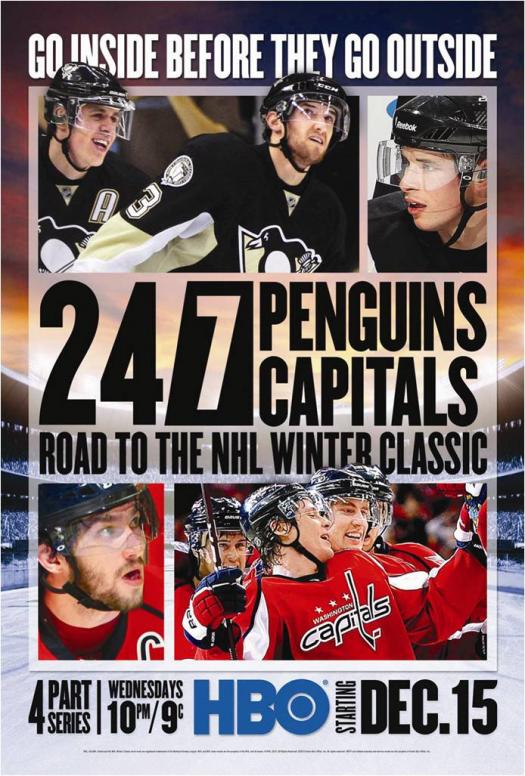 Part I of HBO’s 24/7 series Penguins-Capitals, the Road to the Winter Classic aired tonight at 10:00 p.m.
The episode started with an early introduction and ran from Wednesday December 8th through Sunday December 12th, covering both teams inside and out
The storyline for Part I was both teams going into different directions with the Penguins on a high and the Capitals facing severe adversity.
The teams were broken into different segments.

In the midst of a long winning streak, Pittsburgh’s 1st segment starts right before their game against the Toronto Maple Leafs on Dec 8.
In an interview, you get the sense that Sidney Crosby see’s this team as a special group, saying “he hasn’t seen everyone together like this before”.
Anyone whose been around a hockey team would know that profanity is a common language for hockey players, coaches and personnel. Several great quotes came out of part 1, especially from coaches Bruce Boudreau and Dan Bylsma.
Prior to the Penguins taking the ice against Toronto, viewers got a look at Dan Bylsma’s message during pre-game speeches as he has a presence about him in firing his hockey club up.
Other highlights during the Penguins 1st segment, included a behind scenes look at Deryk Engelland getting three stitches from team doctors following his first period fight with Colton Orr.
During the 1st intermission, Bylsma came into the locker room fired up and yelling “great job Engelland, effing rights”

During the part 1 series, the Capitals were the more fascinating team to watch due to the adversity they were dealing with.
Capitals head coach Bruce Boudreau starts out talking about HBO being around and that how he guarantees everything’s laughs and jokes in the Penguins locker room.
The Capitals struggles to deal with adversity was really something to watch. It still seems like this team is missing the needed leadership.
The 1st segment centered around Boudreau’s message and structure into changing the Capitals into a more balanced team.
He said the biggest challenge is with guys who are “super skilled” and that it’s been a transition for players like Ovechkin to play a more balanced hockey game but that the Capitals star players are buying into the new structure.
Boudreau says the focus is long-term, which he believes will lead to success in the playoffs.
Brooks Laich said during the 1st segment that the Capitals get accused of being too complacent and that needs to change.

Dan Bylsma’s positivity and energy as a coach was really on display during the Penguins 2nd segment.
Sidney Crosby said the first thing with Bylsma is that he’s positive. That’s the common message viewers get to see Bylsma preaching but he’s also hard on his players.
Bylsma’s practices are intense and energetic but Thursday’s practice following Wednesday’s 4-1 win against Toronto Maple Leafs was highlighted on the show by the “moustache boy” shootout that the Penguins pushed back a week due to the 24/7 show.
The player who loses the shootout has to grow a moustache for the entire month.
Matt Cooke was November’s moustache boy and Cooke has been looking forward to losing the stache for weeks. Cooke said it was comical to his family and as soon as Paul Martin lost to Deryk Engelland, Cooke was seen shaving his moustache after practice.

The 2nd Capitals segment centered around off-ice activites. The cameras follow Alexander Ovechkin’s who gets a sponsorship with Gillette and the cameras also give an inside look at the Capitals success off the ice with their community activities.
Nik Backstrom and a few others go outdoors for a community skating activity with the public at the National Mall. Players were skating around interacting with fans by their side and the best question came from a little kid asking Backstrom about the Capitals losing streak.
Newly acquired defenseman Scott Hannan is followed around the DC area, house shopping as he looks for a place to settle in short-term.

The Penguins 3rd segment started off with cameras following Max Talbot leaving his house in the Southside and on his way to the Penguins annual Christmas party which was held at the Consol Energy Center, where the players family and kids get an opportunity to skate around on the ice.
Pascal Dupuis little boy was sporting a No. 9 “Daddy” jersey and Matt Cooke’s boy Jack is an agitator like his dad as Jack tried to spear Max Talbot, Talbot laughed about on camera.
What the HBO camera’s get to show is behind the scenes meetings between GM Ray Shero and Dan Bylsma.
The two meet and talk several times a day and grade each player on a game-by-game scale.
Players are rated on a 1-through-5 scale.
During this segment, players were graded off the Maple Leafs game.
When Shero asked Bylsma about Marc Andre Fleury, Bylsma gave Fleury a 4 out of 5.
Matt Cooke was not as fourtaunate as Bylsma graded him a 2 out of 5 and talked about how his line (Cooke – Talbot – Asham) has not played well and Shero agreed on that front.
Bylsma also didn’t seem too high on Deryk Engelland’s play after the Maple Leafs game. Bylsma gave Engelland a 3.5 but gave that grade mostly for his fight, saying Engelland’s play dropped after his fight which Bylsma claimed is normal.
Shero and Bylsma also talked about Dustin Jeffrey getting a game at the NHL level and see how he performs.

“We need to win a Stanley Cup, ” Owner Ted Leonis talks about during the Capitals 3rd segment. Leonis discusses how Pittsburgh has won their Cup and that there is a ton of internal pressure on the Capitals.
The Capitals losing woes continued to show frustrations throughout the organization and the team’s inability to deal with adversity continued to be highlighted through the show.
During the middle of Capitals matchup against the Florida Panthers on Thursday Dec 9, Boudreau goes on a rant after the second period, proclaiming that the Capitals look like a bunch of guys who feel sorry for themselves.
“Effing get your heads out of your ass, ” Boudreau yelled at his team during the intermission. The Capitals would go on to lose 3-0 to the Panthers, suffering their 4th straight loss and expectations were getting to the Capitals.

Camera’s begin at Pascal Dupuis’ household on Friday morning where Dupuis calls himself the ultimate family guy. Dupuis has 4 kids, 2 dogs, a cat and 2 red fish.
It shows Dupuis being a family guy as he prepares to leave for the road as the Penguins practice in the morning at Southpointe and fly out to Buffalo at 2:00 p.m.
Dupuis calls road trips very important to comradery for a hockey club as the trips bring the players closer together. “You create something special, ” Dupuis says.
Following practice, camera’s give an inside look of what a Penguins plane ride is.
There are no assigned seats on the plane but Sidney Crosby and Marc Andre Fleury have sat together for 4-to-5 years according to Fleury. Some players at the front of the plane that included Crosby, Fleury, Mike Rupp and Max Talbot are shown players playing a war game which is a common ritual for the players on the team plane.
Marc Andre Fleury had some great quotes during the players intense game.
“Suck it Talbot, ” Fleury said laughing. “Max is a douche, ” Fleury later yelled.
Other players on the plane are seen playing cards, while Harvard grad Craig Adams is reading a book.
As the players get settled into Buffalo, Matt Cooke, Marc Andre Fleury and Brent Johnson play a little prank on Mark Letestu and Ben Lovejoy.
While Letestu and Lovejoy are at a steakhouse for dinner with several other players, Cooke, Fleury and Johnson take everything out of Letestu/Lovejoy’s room, including bed, desk, ect, and place them outside of the room.
When players return to the hotel and begin to walk down the hallway, Letestu immediately knows who it was.
“Matt Cooke totally responsible, ” Letestu said. “We’re going to find out who did it and probably do nothing about it, Lovejoy said.

Following a 4th straight loss, Capitals head coach Bruce Bourdeau is gretted with news of several players coming down with a 24/7 flu virus on Friday. A number of players are sent home but it’s still a workday for the Capitals as regular practice is held.
Bourdreau is hit with even more bad news as Mike Green tweaked his MCL during the Florida game.
The Capitals were right back into action on Saturday night against the Colorado Avalanche at home. Boudreau begins to change his message and gets positive. “Don’t get discouraged, ” he tells his hockey team during a pregame speech.
The Capitals though would go on to lose a 5th straight game, suffering a 3-2 loss to the Av’s. Boudreau though preaches to his team that things are going to turn around and that the Capitals played a great hockey game.

The Penguins 5th and final segment of part I begins at Pittsburgh’s morning skate in Buffalo as the team goes through preparations for their 12th straight win.
Bylsma’s a coach that feels morning skates are very important and explains to the cameras of what he looks for from his morning skate.
Camera’s focused on the injured Evgeni Malkin. Strength and conditioning coach Mike Kadar tells Bylsma that Malkin wants to play on Tuesday night against Philadelphia.
With the Penguins having an off-day on Sunday, Bylsma tells Malkin that he will have to pick up the intensity if he wants to get ready to play, which means take some physicality.
Malkin tells Bylsma that he’s not ready for any physicality towards his injured knee.
Camera’s then takes viewers to Bylsma’s pre-game speech just minutes before the Penguins take the ice against the Sabres. “Dictate games…. physicality is where it’s effing played, ” Bylsma said in firing up his team. “In Buffalo, keep this thing going, ” Bylsma said.
The Penguins would go on to win 5-2 and camera’s showed a fired up Penguins locker room after the 2nd period as the Penguins looked to close out the game in the third.
Following the win, Dan Bylsma said, “It wasn’t pretty but 12 is better than 11, ” as the Penguins extended their winning streak to 12 games.

With Bruce Boudreau starting to preach a more positive message to jumpstart his team, the Capitals hit rock bottom to end the show as the team played the New York Rangers Sunday night in New York.
Prior to the game, Boudreau talks about building off of Saturday’s 3-2 loss but things went south immediately for the Capitals.
Down 3-0, Boudreau is disgusted with his team, yelling “show some effing courage, ” when screaming out his players.
The Capitals then go down 5-0 in the second period and Alexander Ovechkin drops the gloves with New York’s Brandon Dubinsky.
Capitals coaches were furious after the Capitals embarrasing effort through two periods. “It’s a effing joke….greatest player in the world fighting, a Capitals assistant coach yells to his team.
The Capitals don’t respond and end up losing 7-0 for their 6th straight loss.
Near the end of the final segment, the uncertainty of Bruce Boudreau’s coaching future finishes up the show. The last time the Capitals had a 6 game losing streak was in November of 2007. The Capitals made a coaching change at the time and hired Boudreau who has led the team to three straight division titles.
“It is unfamiluar terriority, ” Boudreau said. “Think we have a lot of people feeling sorry for themselves.
Part II airs Wednesday, December 22nd at 10:00 p.m.