Chase for the Cup 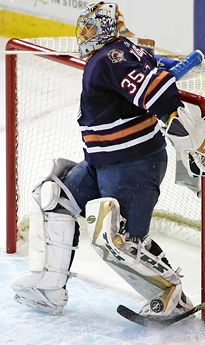 Roloson and the Oilers shocked the Hockey World

The president trophy winner Detroit Red Wings were bounced out of the playoffs last night in 6 games to the Edmonton Oilers. The Oilers were a team that were 32 pts behind the Wings in the standings but pulled off one of the biggest upsets since the Islanders defeated the Penguins in the 93 playoffs. Barry Melrose and other hockey analysis are saying they are shocked that the Oilers dominated the Red Wings for most of the series. I am not that surprised at all by the results. Coming into the series I predicted on this site that Edmonton would win in 6. This was the worst matchup possible for the Wings in the 1st round. They were a old team going up against a young gritty team that’s biggest asset is their team speed.

Manny Legace for one was not sharp the whole series but you can’t put the blame on him. Despite the series not being his fault he is done as a Red Wing. He turned down a 2.5 million offer thinking he could get more on the open market and now that is not likely but in the end he will be the scapegoat as Marty Turco of the Dallas Stars may be. Detroits big time players like Shanahan,Datsyuk was invisible and Nik Lidstrom looked out of place most of the series. The Oilers speed were to much for the Wings to handle and expect some big changes to coming in Detroit after 3 straight seasons of not making it to the Western Conference Championship.

Whoever the Penguins hire as General Manager he needs to look at how Edmonton’s GM Kevin Lowe has built his team mainly through the draft except for the additions of Samsonov Pronger, Peca and Roloson. Shawn Horcoff 27yrs old (98 draft, round 4), Ales Hemsky 23 yrs old ( 2001, round 1 ), Jarret Stoll 24 yrs old ( 2002, round 2 ) Brad Winchester, 25 yrs old (2001, round 2 ) Raffi Torres 24 yrs old, (2000 round 1). All five of them are top 2 line forwards and Hemsky has the potential offensively to be a star in this league. The Penguins on the other hand have a strong foundation with Crosby, Malkin, Fleury and Whitney but they don’t have solid core players like a Hemsky, Stoll, Torres and Horcoff who are tier 2 players a team can build around. Thats the biggest negative with the Penguins roster. They have top tier players in Crosby and Malkin but because of their awful draft record from 98-02 their stuck with throwing players on their top lines like Surovy,Koltsov,Quellet who are players for example that would never see a day on a top 2 line for a playoff caliber team. 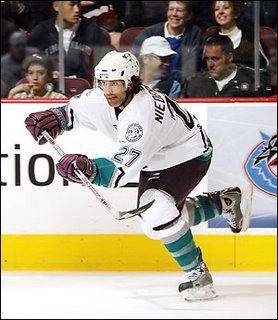 Scott Niedermayer scored late in the third to put the Ducks up 2-1 to force a game 7 in Calgary. Anaheim made a gutsy move benching 2003 playoff hero Jean-Sebastien Giguere for young up and coming goaltender Ilya Bryzgalov who was brilliant stopping 21 shots. This series has been one of the best in years and its no surprise this one will go seven. 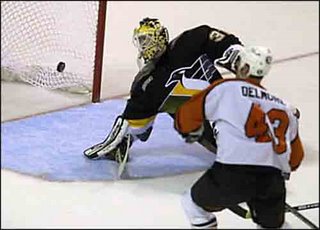 Carolina Hurricanes look poised to knock out the Canadiens tonight as they have now lost three straight. Game 3 might have looked like a must win for the Hurricanes but in reality for a lower seed when your up 2-0 Game three is the most important game. Think back to the second round (2000) of the Penguins – Flyers series. The Pens were the lower seed and not the better team but had just took two games in Philly to take a 2-0 lead. Game 3 result: a overtime loss and the Flyers win the series in 6. The Canadiens were in the same situation but couldn’t finish off the Hurricanes in Game 3 and now they have their backs to the wall down 3-2. For the Habs to take the next two games Huet and Kovalev are going to have to step up their games even more than they have.

Rumors around the League

Hockeybuzz.com is reporting that Craig Patrick is close to a agreement to become the New York Islanders GM. I dont see that happening as reports out of New York say that former La Kings GM Dave King along with Jim Nill assistant general manager of the Detroit Red Wings are the front runners. The Islanders would be a terrible situation for Craig. A better situation for him would be to take the Boston Bruins job if he is a strong candadate for the job. New York is a young team whose roster is a mess and we saw what he did in Pittsburgh with a young roster. Boston has a more talented roster and Craig would have a much better chance to succeed and get his reputation back as one of hockeys top GM’s in Boston not NewYork.

The 03-04 stanely cup champions Tampa Bay Ligtning are expected to make several changes in the offseason. Brad Richards is their first priority and he will command a contract in the range of what St.Louis signed ( 6yrs – 31 million. Plus the need for a top notch goaltender could lead to the departures of left winger Ruslan Fedotenko and defenseman Pavel Kubina. The Penguins are not expected to be very active in free agency but those are two players they should keep a eye on. Fedotenko is a big winger who would look nice next to Malkin. Kubina is a solid defenseman that could be a valuble asset to the Penguins. Both would not be cheap but not to expensive. Fedotenko is expected to command 2.5 to 3 million on the open market and Kubina around 2 million.