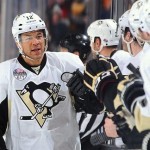 PENGUINS CLINCH NO. 1 SEED
Jarome Iginla (12) and Kris Letang (5) scored third period goals leading the Pittsburgh Penguins (34-10-0, 68 pts) a 3-2 win over the Bruins Bruins (26-12-5, 57 pts) on Saturday afternoon to earn home-ice advantage throughout the Eastern Conference playoffs.
The Penguins without Sidney Crosby, Paul Martin, Evgeni Malkin and James Neal continue to march on, winning their sixth straight game and have now won 21 of their last 23 games. Of the notable injured players, with four games remaining in the regular season, the only sure bets to be ready for Game 1 of the playoffs is Evgeni Malkin and James Neal, although Martin and Crosby remain possibilities. The Penguins hope to see Martin get cleared to play this upcoming week so he can get a game in or two before the playoffs.
In the win, the Penguins got standout play from goaltender Tomas Vokoun who was excellent in goal making 38 saves, earning his 12th win of the season.
Another standout in the win was Jussi Jokinen who left Wednesday’s game due to an illness and shined today with a goal and two assists for his second 3 point game in a Penguins uniform. Jokinen has 4 goals and 8 points in six games as a Penguin.
The Bruins opened the scoring on Brad Marchand’s (17) power play goal at 10:18 of the first period. On the goal Zdeno Chara carried the puck up on the power play and passed it to a streaking Marchand on the left side who came with speed cutting inside at the left circle to get between Kris Letang and Mark Eaton and beating goaltender Tomas Vokoun from 15 feet out to give the Bruins a 1-0 lead.
The Bruins were swarming and all over the Penguins in the first period, outshooting Pittsburgh 13-5, but Vokoun kept the game at 1-0 and the Penguins tied it in the second period on Jokinen’s 10th goal of the season at 5:10 period. On the goal, Jokinen got to a loose puck in front and beat Tuukka Rask glove side.
Against the NHL’s top penalty killing team, special teams would be the difference in the game as the Penguins got power play goals from Jarome Iginla and Kris Letang in the third. Iginla broke a 1-1 tie with a power play blast from about 50 ft out at 4:43 of the third, and Letang added some insurance and another power play goal at 8:29 of the period.
Iginla who squashed a trade to Boston was booed by Bruins fans nearly every time.
Notes: In an emotional game for the city of Boston following the manhunt of the Boston Marathon bombers, Penguins coach Dan Bylsma wore a black T-shirt with the words “BOSTON STRONG” over his shirt and tie and the Penguins wore a Boston patch on their jerseys. Via AP, a pregame slideshow on the video board above center ice showed pictures of smiling policemen after the second suspect in the Boston Marathon bombings was taken into custody. Also shown were individual photos of Lu Lingzi, Krystle Campbell and Martin Richard, who were killed in Monday’s bombings, and Sean Collier, a Massachusetts Institute of Technology police officer shot to death by the suspects.
*Simon Despres, Robert Bortuzzo and Dustin Jeffrey were healthy scratches for the Penguins…..