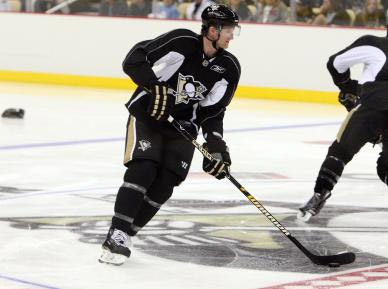 With a day off on Wednesday and two full practices before back-to-back games this weekend, the power play is a major point of focus for the Penguins coaching staff this week.
The Penguins who went 0-for-6 on the power play against the Buffalo Sabres Tuesday night, have a need for Alex Kovalev to become a focal point/catalyst of the power play.
Head coach Dan Bylsma hinted at that today in his post-practice comments but where Kovalev is the best fit (right point of half-wall?) appears to be something Bylsma is looking for a solution too and the same for other newcomers like James Neal.
“It’s something {power play} that we have continued to try to figure where the best spots for our players are since the arrival of James Neal and Kovalev. Chris Kunitz has come back and stepped into that equation, ” Bylsma said.
“So we know we want to utilize Kovy’s ability, his passing ability. But he also has a shooting ability that we’d like to see more of out of him.”
When Kovalev was working the right point in his first couple games with the Penguins (Paul Martin was sidelined due to injury), he was most effective as the opposition respected Kovalev’s skill and backed off creating space for himself and others.
The Penguins appear to be leaning towards that route but this is a power play that has continuously lacked different looks for a while now, so why not use Kovalev at the right point and half-wall?.
The team would have the ability to do that if Dustin Jeffrey got a shot on the 1st power play unit as Jeffrey has the ability to play the half-wall and the right point.
Here’s the route I would go with the top-2 units:
1st Unit:
Kunitz – Neal – Jeffrey
Letang – Kovalev
Down low on this unit would be Kunitz – Neal – Jeffrey
*Kunitz as net front presence and win puck battles in the corner.
*Neal working primarily in the high slot and also down low on the goal line to setup plays down low with Jeffrey on the half-wall
*Jeffrey working primarily on right half wall
Letang at the left point and Kovalev at the right point
*Have some versatility with Kovalev and Jeffrey and rotate both players at the particular spots.
2nd Unit
Kennedy – Letestu – Staal
Niskanen – Martin
Down low on this unit would be Kennedy – Letestu – Staal with a focus on running plays from the left side
*Kennedy working on left half-wall
*Letestu as an option on the goal line for either left or right side. Also an option in the high slot.
*Staal a slot/front net presence and right half-wall on set plays coming from the right side. Staal just doesn’t have the playmaking ability to take charge or be a leader of a particular unit.
Matt Niskanen at the left point and Paul Martin at the right point.
More Bylsma on what he’s looking for from specific players on his power play:
“Kris Letang is a guy who we like at the top of the power play, ” Bylsma said. “He needs to focus on shooting more, but where Neal goes, where Chris Kunitz goes…. and Tyler Kennedy is a guy who’s stepped into the equation because of some of the success we’ve had with him prior to getting these guys, ” Bylsma said.
“So the equation isn’t one we’ve figured out in the last three games, and we have spent some more time in practice on it because of that situation.”
“Again, special teams is a huge factor. The tight games that we’ve been playing, it continues to be a bigger factor for us. So it’s something we’d like to get a solution to and improve upon as we go into these games.

Bylsma’s extension popular among his players

Dan Bylsma is a coach whose established himself as a coach who his players will go to battle for. To no surprise, Bylsma’s extension was popular among his players today.
What’s unique about Bylsma is that he appears to understand “todays” player. He provides a good mix of making it fun for the players to come to the arena everyday but also installs a discipline that the players respect.
NHL Coaches don’t stay in one place long, especially in the Penguins organization but this is a new kind of organization with Ray Shero in charge.
Bylsma is Shero’s guy and they are a fit together on several fronts. It would be wrong to predict that Bylsma will have a Lindy Ruff kind of run in Pittsburgh but he’s going to be the coach of the Pittsburgh Penguins for a long-time.