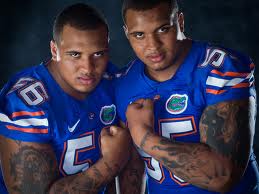 The Pittsburgh Steelers would love to team a dominant guard next to pro-bowl center Maurkice Pouncey and an ideal fit would be Mike Pouncey, Maurkice’s twin brother who is the top rated guard in the 2011 NFL draft.
However, for the Steelers to make it happen, they will surely have to trade up in the draft.
The Steelers met with Pouncey today and during a media session at the combine, Mike said the chances of him being around at No. 31 are not good. Steelers GM Kevin Colbert also made the same statements.
Like his twin brother, Mike can play center and guard. Mel Kiper of ESPN.com has Pouncey being selected No. 25 to Seattle Seahawks in his latest mock draft as does NFLdraftscout.
There some buzz coming out of the combine that some of those projections are too low and he’s moving into the direction of being a top-20 pick.
Aaron Wilson of the National Football Post reports that Pouncey indicated “some teams told him he plays better than his twin Maurkice.”
Pouncey told the media today that his primary goal is to play center and be selected before his brother, who went 18th overall last season.
The Steelers primary focus in the first round will on the defensive line, most notably defensive tackle, cornerback and offensive tackle. Pouncey is considered the only legitimate 1st round guard at this point.
It is an extremely deep draft at the defensive end position with some NFL draft insiders predicting as many as 9 defensive ends going in the first round.
The lack of a CBA could hinder teams from working out draft prospects in the coming months.