Cooke wants to get a deal done with the Penguins 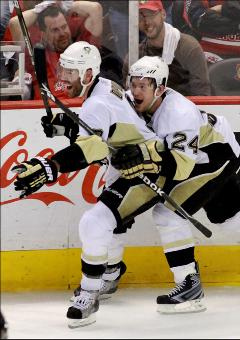 Winger Matt Cooke has expressed a strong desire to remain in Pittsburgh and is hopeful to get a deal done with the Penguins this week, according to a league source.
“We are working away, ” Pat Morris the agent for Cooke told Inside Pittsburgh Sports this afternoon. Negotiations picked up last week with both sides exchanging numbers and have continued this afternoon before Penguins GM Ray Shero departs for Los Angeles.
The two sides are looking to bridge the gap in the amount of money per season and reach an agreement. A deal is believed to be close.
“Matt wants to stay in Pittsburgh so both sides are negotiating, ” Morris reiterated.
Both sides appear optimistic that a deal is going to get done before the NHL draft. Pittsburgh has proposed a three year deal believed to be in the range of $1.5 million per season.
It has not been confirmed that the Penguins are willing to include a limited or no trade clause which some believe is a concession the Penguins have made.