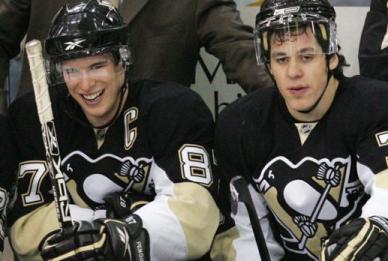 Pittsburgh wins seventh straight
Sidney Crosby scored two third period goals, including the only goal in the shootout as the Pittsburgh Penguins over-came a 2-0 deficit to defeat the Florida Panthers 3-2 Friday night at Mellon Arena for their seventh straight win.
Pittsburgh has that championship swagger about them through 10 games of the season; They find ways to win.
Minus Sergei Gonchar for the first time this season, Pittsburgh came out flat and the Florida Panthers jumped out to a 2-0 first period lead on goals from Steve Reinprecht (3, 4,).
Tomas Vokoun (41 saves) continued to shut the door for the Panthers after a scoreless second period and the Panthers appeared to be on their way to an impressive win in Pittsburgh after a disappointing 5-2 loss Wednesday night against Buffalo.
But, Pittsburgh made timely adjustments and Sidney Crosby playing in his 300th career game, took over the third period with some help from star center Evgeni Malkin
Crosby scored twice in the third period including a shorthanded goal with 3:19 left in the third period to tie the game at 2-2 and force over-time.
Crosby and Evgeni Malkin rarely see time together on the penalty kill but with the Penguins down a goal, Bylsma put the dynamic duo out together and it paid dividends.
Malkin assisted on both of Crosby’s goals and had the primary assist on Crosby’s short-handed tally.
After a scoreless overtime, Crosby came up big again beating goaltender Tomas Vokoun with a nifty deke for the lone shootout goal.
Pittsburgh won the shootout 1-0 thanks to Crosby and backup goaltender Brent Johnson. Johnson made 27 saves to earn his first win with the Penguins and was 3-for-3 in the shootout.
Pittsburgh is 3-0 on a five game home-stand that resumes Saturday night against the New Jersey Devils.
Post-Game Notes
Pittsburgh has won 9 games in the month of October for the first time in franchise history.
Panthers goaltender Tomas Vokoun (1-6) made 41 saves in the loss. Vokoun is winless since the Panthers season opener.
Defenseman Martin Skoula made his season debut, replacing Sergei Gonchar (wrist) in the lineup.
Pittsburgh was 1-6 on the power play