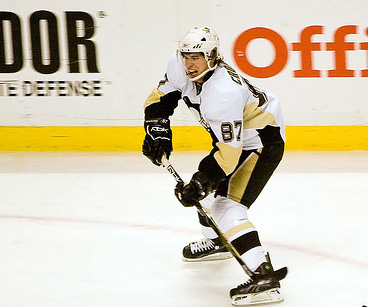 Pittsburgh wins series, 4-3
Great players elevate their games in big situations and the Penguins got a dominant performance from Sidney Crosby in Game 7 Wednesday night.
Crosby had two goals and 1 assist as the Penguins jumped out to a commanding 5-0 lead in the second period and beat the Washington Capitals 6-2 Wednesday night to advance to their second consecutive Eastern Conference Finals
In a series that met the billing and lived up to the hype, the Penguins made up for a missed opportunity to close out the Washington Capitals in game 6 and put on a spectacular performance in game 7 while the Capitals put on a lackluster performance.
Goaltender Marc Andre Fleury, who prior to game 7 was outplayed for much of the series by rookie goaltender Simeon Varlamov, made a game changing breakaway glove save early in the first period on Alexander Ovechkin who came in all alone on Fleury.
It was a momentum changing save that the Penguins have been waiting for all series and their $35 million dollar goaltender gave it to them.
Following Fleury’s sensational save on the games top goal scorer, Crosby and the Penguins took over from there. Crosby (11) got the Penguins on the board first, scoring at 12:36 of the first period on the power play.
Pittsburgh got a emotional boost early in the day when it became known, following the Penguins morning skate that defenseman Sergei Gonchar would return to the lineup.
Playing at less than 100%, Gonchar’s presence paid dividends and assisted on Sidney Crosby’s first period tally as Gonchar threw the puck to the net on one leg and Crosby put it in the back of the net.
From that point it was known Crosby was going to have a big night.
Just eight seconds later, Craig Adams (1) scored at 12:44 of the first period to put the Penguins up 2-0.
The Penguins had the Capitals on the run, and just 28 seconds into the second period, Crosby took over and fed Bill Guerin with a beautiful pass in slot and Guerin (5) buried a one-timer past Simeon Varlamov.
Guerin who hasn’t advanced past the second round since 1995, recorded his 5th goal of the playoffs Wednesday night and has put an end to past playoffs runs where he was viewed as a playoff under-achiever.
Following Guerin’s goal, Pittsburgh kept pouring it on and Kris Letang (3) scored at 2:12 of the second period with a blistering snap shot past Simeon Varlamov as the Penguins took a commanding 4-0 lead early in the second.
The Penguins chased Varlamov out of the net and ended the Capitals hopes of advancing to the Eastern Conference Finals.
Jordan Staal (2) added to the Penguins lead scoring at 11:37 of the second period to push the Penguins lead to 5-0. Satan assisted on Staal’s second period tally giving him four assists in the series.
The Capitals got on the board late in the second period as Alexander Ovechkin scored on a Marc Andre Fleury miscue to cut the Penguins lead to 5-1. Ovechkin ended the playoffs with 11 goals and scored 8 goals in the series.
While Ovechkin was sensational against the Penguins, the M.V.P of the series was Sidney Crosby. Crosby not known as a dominant goal scorer, scored 8 goals in the series and has established himself as the games most complete player.
Crosby put on a display throughout the series and finished off the Caps, beating Jose Theodore 5-hole with a breakaway goal at 2:02 of the third period as the Penguins went up 6-1.
Brooks Laich added a third period goal for the Capitals. Jose Theodore made 10 saves in relief of Simeon Varlamov.
Marc Andre Fleury made 19 saves to record his eighth win of the playoffs.
*Crosby has 21 points through the first two rounds of the series and has his sights on Mario Lemieux’s team record 44 points in the playoffs. He also has his sights on winning his first Stanley Cup. Pittsburgh will play the winner of the Boston-Carolina series.