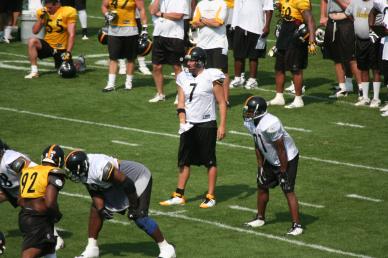 By Dale Grdnic
LATROBE, Pa. — If there were any boos, they certainly were drowned out by the loud, sustained cheers and applause when Pittsburgh Steelers quarterback Ben Roethlisberger and wideout Hines Ward ran the gauntlet between the team’s locker room and the practice fields Saturday afternoon at Saint Vincent College.
Roethlisberger high-fived every fan that he could reach during his trek down the hill before the team’s second practice on the day, and he interacted with as many as possible afterward as well. Following practice, he spoke for about eight minutes with the large media contingent in attendance.
“It was good, good to be out here,” Roethlisberger said. “Hines and I walked out here together, and they cheered. So, it was fun. … Just hearing everybody cheer and having my teammates behind me coming out here, that was a lot of encouragement.
“I wasn’t worried about the first practice this morning. That one was all right, but I was nervous about the afternoon one. But I think it went well. I completed every pass, so the football side went well. And the fans were warm and loving, which is how I had hoped they would be.”
Roethlisberger took the initial first-team snap during both the morning and afternoon session, but that was by design and not intended to send a message of any kind, according to Steelers offensive coordinator Bruce Arians and head coach Mike Tomlin.
“He’s our quarterback and that’s it,” Arians said. “(But) we knew this was going to happen. So, it?s not like somebody suddenly got hurt in the last preseason game and left us scrambling. We’ve got plenty of time to get all four of our guys ready to play.”
Roethlisberger has said since the spring that he’s in the best shape of his career, and he appeared to be as sharp as ever as well with few — if any — poorly-thrown passes. He threw successfully to the backs and downfield with equal success, hooking up with Mike Wallace, Antwaan Randle El and Hines Ward on a regular basis.
“It felt good getting in there with the first group, but I talked to B.A. and knew that was how it was going to be today,” Roethlisberger said. “But I just have to take things one day at a time. Tomorrow might be different, so we’ll see. … But all I want to do is be the best I can be and help this team win a championship.
“That’s always my goal, and that’s not going to change. I want to get out there, and I want to win a championship this year. And that’s always my goal every year, so this one is no different. … There’s always butterflies coming out, but I was a little more nervous this year. After we started stretching and getting into practice, I felt pretty good. And now, we’re moving forward.”
The quarterback rotation basically had Roethlisberger with the first team, Leftwich with the second unit and Dennis Dixon the third. Veteran Charlie Batch appears to be the odd man out and likely will be released after Roethlisberger is reinstated possibly after four games.
“I’ll do whatever they want me to do,” Roethlisberger said. “I’m happy with how things have gone so far, but … I’ll even work with the scout team if that’s what they want me to do. I just want to get some work in.”

Rashard Mendenhall appears to be a little quicker, as he raced around the left and right ends behind Max Starks and Flozell Adams, respectively.
However, Mendenhall clearly still shies away from contact, turning away as a defender approaches him, even though there was little to no contact.
Don’t mention that last statement to James Harrison, though, as the veteran outside linebacker smacked Mendenhall and Frank “The Tank” Summers to the ground during an early team series. To his credit, Mendenhall held onto the ball after catching the pass across the middle.
“We all know that James is capable of that, but he probably wasn’t even trying to do it,” Tomlin said. “He’s a pro, and he has good practice etiquette. If you look at it closely, you’ll see that he actually tried to back off.”
Despite being the extra defensive back in nickel coverage, Roethlisberger and Leftwich both seemed to torture cornerback William Gay on out patterns.
Stefan Logan, who handled both the kickoff- and punt-return duties for the Steelers last season, cornerback Crezdon Butler, wideout Arnaz Battle and wideout Antonio Brown handled the punt-return duties. Veteran Randle El watched, but did not field any kicks. Randle El caught a few long passes, though, and he also ran the ball on a reverse with a nice cut-back to get up field.

The afternoon session featured a period where the offensive and defensive lines battled in one-on-one pass-rushing drills with the offense appearing to get the best of their counterparts more often than not.
Left offensive guard Chris Kemoeatu did a nice job on defensive end Nick Eason. … Defensive tackle Steve McLendon made a nice inside move to beat center Justin Hartwig. …
Jonathan Scott went up against linebacker Thaddeus Gibson on a handful of occasions and only lost once. … On the other hand, No. 1 pick Maurkice Pouncey struggled with his first one-on-one drill, as second-year pro Ziggy Hood, the club’s top pick in 2009, handled him with both quickness and skillful moves. Finally, on the final snap, Pouncey forced Hood wide…. Gibson also struggled with Adams, who has a distinct size advantage and easily pushed him to the ground….
Tony Hills, a third-year offensive tackle, continued to display little to no reason to keep him another season. He got beat by Gibson and rookie outside linebacker Jason Worilds. Hills also performed well against Worilds. …
Second-year players Ramon Foster (OT) and Sunny Harris (DT) pretty much split their battles. … Scott and center Doug Legursky stuffed second-year defensive end Doug Worthington and tackle Scott Paxson. Legursky also held off Steve McLendon, but faltered when Chris Hoke barreled through the middle. … Worthington’s success was overwhelming against Pouncey, however, including three straight before the top pick held his own.
***The first camp injuries occurred Saturday, as nose tackle Casey Hampton and running back Jonathan Dwyer injured their hamstrings during the morning and afternoon sessions, respectively.