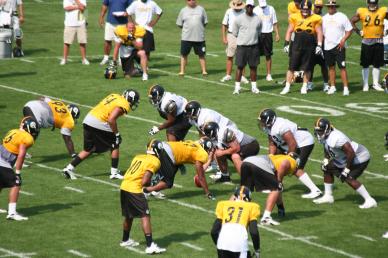 By Mike Bires
LATROBE _ Mike Tomlin liked the “spirit of the group” at Monday’s practice. He called it a productive day. But the coach didn’t appreciate the poor training camp etiquette he saw.
There were times at the afternoon workout that some players pushed and shoved each other after a play. He also thought that some of the practice periods were not run efficiently.
In one instance, nose tackle Scott Paxson and guard Ramon Foster almost came to blows after they locked arms for several seconds after a pass rushing/passing blocking drill.
“We have to develop our practice etiquette and professionalism, just like we have to do our assignments,” Tomlin said. “We come here to develop skill and to develop our team, techniques, and assignments but we also have to learn how to practice.”
Tomlin added that, overall, he thought the Steelers accomplished a lot in both of Monday’s practices.
“All in all I like the spirit of the group. I like how they fought through it today,” Tomlin said. “All in all, I thought it was a very productive day.”
MISSING MR. ROONEY
It sure is strange being at camp and not seeing owner and team chairman Dan Rooney.
Now that he’s serving as the United States ambassador to Ireland, he’s living in Dublin, thousands of miles away from Pittsburgh and his beloved football team.
“I have talked to Mr. Rooney (on the phone),” Tomlin said. “He’s with us in spirit.
“One of the things he mentioned to me is that it’s the first start of training camp he’s missed in 68 years. So that kind of puts it in perspective for me. I’m missing him, but I’m sure he’s missing us a little more.”
Dan Rooney, 77, is listed in the Steelers’ media guide as the team’s Chairman Emeritus.
“It’s different not having him here,” defensive end Brett Keisel said. “We’re missing him.”
STAPLETON MISSES BOTH PRACTICES
After sitting out the morning practice with a sore knee, Darnell Stapleton said he’d return for the afternoon practice. But he didn’t.
“His knee acts up every now and then,” Tomlin said. “We are actually taking a look at him today. I’ll probably have more information regarding him either tomorrow morning or tomorrow afternoon.”
Friday when the Steelers reported to camp, coach Mike Tomlin said Stapleton may be limited due to his sore knee. But until today, Stapleton had been running with the first-team offense at center. Even though he was the starting right guard for most of last season, Stapleton was playing center because Justin Hartwig has been limited with a toe injury.
Wide receiver Hines Ward also missed both practices Monday. He’s now sat out three straight practices (he didn’t practice Sunday afternoon). But he’s not hurt. Tomlin is just taking it easy on the 33-year-old, 12th-year pro.
Also sitting out the morning practice were three other 30-plus veterans: linebacker James Farrior, cornerback Deshea Townsend and defensive end Travis Kirschke. They returned in the afternoon.
Rookie defensive lineman Ra’Shon “Sonny” Harris missed his practice for the second straight day with a groin pull.
Strong safety Troy Polamalu, who camp to camp with a tender hamstring, took the afternoon off.
Meanwhile, running back/kick return specialist Stefan Logan returned to practice after missing the first to days with a mid-foot sprain. The Steelers removed him from the physically unable to perform list.
Photo: David Hague – Inside Pittsburgh Sports
More Day 4 Reports
Morning Practice Update
Bires: Roethlisberger is not having a bad
Burnett in the mix at punt returner