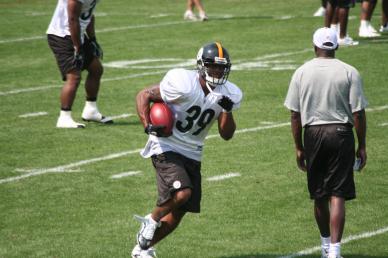 By Dale Grdnic
Photo: David Hague – Inside Pittsburgh Sports
LATROBE, Pa. — While there was no goal-line drill, the estimated record crowd of 15,000 to watch the Pittsburgh Steelers Friday night at Latrobe High School’s Memorial Stadium were still thrilled with every pass in the 11-on-11 drills and the hard-hitting backs on backers competition.
Steelers coach Mile Tomlin, however, was a little more critical.
“I think our running backs are really representing themselves well in that drill, and I like what we’re getting from them,” Tomlin said. “The issue that I have with them is that they’ve got to do a better job taking the work from that drill and bring it to our pass-under-pressure, 11-on-11 drill.
“(It) always follows that drill. So, I like some things that I see in that hitting drill, but I didn’t necessarily see it carried over to the 11-on-11 drill. I thought the running backs one the first drill, and the linebackers won the 11-on-11 drill. Actually, the reason that we do the (first) drill is for the 11-on-11.”
In the backs-on-backers competition: Linebacker James Farrior beats running back Willie Parker. Fullback Carey Davis did good job on linebacker Lawrence Timmons.
Linebacker James Harrison bull-rushes young tight end David Johnson. Linebacker Andre Frazier slipped past bullish back Frank “the Tank” Summers.
Running back Rashard Mendenhall did a decent job on linebacker Keyaron Fox. Summers straightened up linebacker Donovan Woods.
Tight end Dezmond Sherrod did nice job on linebacker Arnold Harrison. Running back Justin Vincent pushed linebacker Andy Schantz out of the way.
Linebacker Tom Korte was able to get past Carey Davis with little resistance. Parker was able to handle linebacker Bruce Davis. Linebacker Patrick Bailey needed to take a wide rush to get past Johnson.
Summers held his own against Fox, but Woods was able to slip past Mendenhall.
This is where injured linebacker LaMarr Woodley, watching the drill from the sideline, began with some good-natured jawing with Mendenhall.
“What’s the matter 34,” Woodley said. “You don’t want any more of this?”
“It’s easy to talk when you’re kneeling on the sideline,” Mendenhall replied.
“You just wrote a check that bounced,” Woodley said.
After some additional chatter, Mendenhall approached Woodley to make his point that it must be easy for the linebacker to talk that way since he’s not in the drill. That’s when Woodley hit Mendenhall with a walk-off line.
“You should know,” Woodley said, “since the sideline is where you watched us play all last season.”
And the drill continued: Sherrod struggled a bit with Frazier, but Harrison was tough for Isaac Redmond. Still, Redmond did better than expected.
Farrior’s spin move did not fool Vincent, and Johnson easily pushed Timmons to the side to give the backers a slight edge.
Carey Davis stuffed Bailey, and Mendenhall continued the success against Frazier. Summers slammed Korte, but the streak ended when Woods got past Parker after an initial collision.
Schantz slammed into Redmond, pushed him back and spun off. Sherrod handled Bruce Davis with little trouble, and Johnson was too tough for Frazier.
Vincent and Redmond kept it going for the backs with stuffs against Arnold Harrison and Woods. And Mendenhall handled Korte.
Timmons sliced past Johnson, and James Harrison blew past Summers in the finale. However, the backers still won the drill.