Detroit takes control of the series 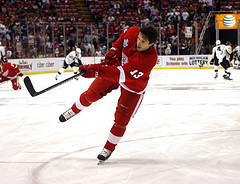 Detroit leads series, 3-2
The Detroit Red Wings put to rest any talk that momentum was moving towards Pittsburgh as the Detroit Red Wings crushed the Pittsburgh Penguins 5-0 Saturday night at Joe Louis Arena to take a 3-2 series lead in the Stanley Cup Finals.
The presence of Pavel Datsyuk in the lineup for the first time in the series, changed the mental makeup of the Wings and Datsyuk made his presence felt early and often, finishing the game with 2 assists and was a calming presence on the power play.
Three power play goals by the Red Wings in the second period did the Penguins in, who were undisciplined and frustrated throughout the game.
Despite playing at 85%, Pavel Datsyuk was among the games top performers at both ends of the ice. “He did very well for being off for as long as he has been,” Detroit Red Wings defenseman Brian Rafalski said. “He wasn’t 100 percent Pavel Datsyuk, but I will take 85 percent of Pavel Datsyuk than 100 percent of other guys.”
The prevailing thought coming into game 5 was that Pittsburgh was beginning to take advantage of a older Red Wings team who had key players such as Tomas Holmstrom, Brian Rafalski, Dan Cleary and Pavel Datsyuk nursing injuries.
The Red Wings responded like championship teams do and took control of the series. The pressure now turns to Pittsburgh who are on the brink of elimination.
Everything that could have went wrong for Pittsbrugh in game 5, went wrong. The Red Wings torched the Penguins penalty kill and chased Marc Andre Fleury for 5 goals on 21 shots.
Just like the Red Wings did in games 1 and 2, they took advantage of miscues from the Penguins such as a bad line change on Valtteri Filppula’s second period goal.
Detroit has now outscored Pittsburgh 11-2 in their three games in Detroit. Returning home for game 6, Pittsburgh is in the same situation that they were in last year.
Game 5 was a statement game for the Red Wings. The Red Wings now get two days of rest.
Time will tell if Pittsburgh can continue their dominance at home and force a game 7.