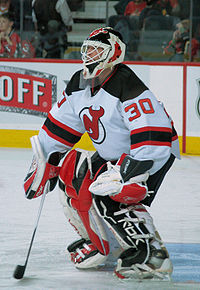 The New Jersey Devils played a complete 60 minute game, getting goals from four different players to end the Penguins 7 game winning streak Saturday night.
The Devils frustrated the Penguins in the neutral zone and got 32 saves from Martin Brodeur in a 4-1 win over Pittsburgh.
In a matter of three days, the Devils have beaten the top two points leaders in the Eastern Conference.
The Devils limited the Penguins chances playing a tight defensive game and attacking the Penguins offensively on creating turnovers in the neutral zone.
Devils head coach Jacques Lemaire who implements a trapping style was very pleased with his teams performance against Pittsburgh.
“I think that we played a really good, tight game,” Lemaire said. “We didn’t give them much. I really enjoyed the game because we had no passengers; everyone did their job and was good with the puck. The Penguins were waiting for a little life, which we never gave them.”
After a slow start, the Devils are now 6-3 on the season and 5-0 on the road for the first time in team history.
Sunday Rumor Mill
Flyers eyeing Shanahan?
The Philadelphia Flyers offered a contract to Brendan Shanahan last year and according to ESPN.com’s Pierre LeBrun the Flyers are thinking about whether he’s a good addition to the team right now. It’s believed Philadelphia would be a city that Shanahan might consider.
Neal in line for big payday?
One of the most under-rated players in the game is Stars winger James Neal. Neal, 22, was a primary target for the Penguins last year in trade talks regarding Ryan Whitney and the young forward is a restricted free agent at seasons end and will be in line for a big payday from the Stars.
The Stars will open up contract talks with Neal before the All-Star break.
Richards expected to be suspended
According to the Philadelphia Daily News, Flyers captain Mike Richards will likely get suspended after his hit on David Booth last night against the Panthers.Booth was skating into the Flyers’ zone when he was leveled by Richards, who led with his shoulder. Tuomo Ruutu was suspended three games for a similar hit this week.
Notes
*A team insider says the Penguins want Ben Lovejoy to keep playing and Nate Guenin will be called up for the Penguins West-Coast trip next week.