Dixon out; Leftwich back in? 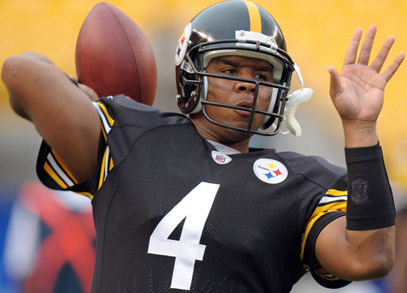 By Dale Grdnic
PITTSBURGH — Dennis Dixon is out, and Byron Leftwich is back in for the Pittsburgh Steelers this week.
Dixon, the Steelers’ starting quarterback during the opening two games this NFL season, suffered a left knee injury Sunday in Nashville, Tenn., will have surgery Wednesday and be out several weeks. Leftwich, the expected starter before being sidelined with a left knee injury during the final preseason game with Carolina, should return to practice Wednesday.
Leftwich and veteran Charlie Batch, who took over for Dixon after his injury against the Titans, are the only two regular quarterbacks eligible to play this week. Ben Roethlisberger has two games remaining in his four-game suspension for violating the NFL’s personal conduct rules. He’s eligible to return after the home game with Baltimore Oct. 3.
“(Leftwich) has been able to comfortably get through some workouts,” Steelers coach Mike Tomlin said Tuesday during his weekly press conference. “Now, workouts are different than practice, of course, and games, particularly the unanticipated movements that come with football.
“But we feel comfortable with where he is. We’re going to proceed through the week and see how this thing sorts out. Those are the two candidates. You’ve got to say Charlie’s in the pole position, because he’s got a clean bill of health at this point.
“We don’t anticipate Byron’s health being an issue,” Tomlin added, “but you at least at this point in the week acknowledge that it could be a factor in determining how the reps sort out and who ultimately plays.”
Tomlin also noted that the Steelers will not bring in a third quarterback at this point, but there are several candidates for the emergency job. The top player for that spot would appear to be Antwaan Randle El, a four-year starting quarterback at Indiana, who is 20-for-25 as a passer in eight-plus NFL seasons.
Randle El has four touchdown passes in the regular season with a career passer rating at 153.1, the highest in NFL history among players who have attempted at least 12 passes. He is the only wide receiver in NFL history to throw a touchdown pass in the Super Bowl with a 43-yard scoring toss to MVP Hines Ward against Seattle in Super Bowl XL Feb. 5, 2006.
“We also have Arnaz Battle, who was a quarterback at Notre Dame, and Hines threw for 400-plus yards in the Peach Bowl one year,” Tomlin said. “(So), we’ve got options. Every man’s capable. Guys want to ante up and kick in. I appreciate that about them.”
It won’t be known if Dixon will go on injured reserve until after the surgery begins and the extent of the injury is known.
While many believe the Steelers were conservative on offense at Tennessee, Tomlin blamed the club’s lack of success on third-down situations. The Steelers were just 2-for-15 (13 percent) against the Titans.
“I thought Charlie made some plays, particularly in the second half, and we had an opportunity to make some plays we didn’t make,” Tomlin said. “They were competitive catches, no question. … Heath Miller, I thought, had an opportunity to deliver a play or two for Charlie. Mike Wallace had an opportunity to deliver a significant play that would’ve put us in scoring position on a third down.
“I thought Hines (Ward) was capable of maybe catching that touchdown on that little short fade. Those are the kind of plays that need to be made. Competitive plays, yes; combative plays, yes. But those are the kind of plays you’ve got to make for a quarterback, particularly when you’re playing with one who hasn’t played a bunch or is in a backup situation. We weren’t able to do that.”
Notes: Steelers right offensive guard Trai Essex (left ankle) was on crutches Tuesday and has his foot in a boot. If he can’t play, Tomlin said that Doug Legursky would start at right guard. … The clubs other previously injured players — left offensive tackle Max Starks (left ankle), nose tackle Casey Hampton (hamstring), outside linebacker Jason Worilds (shoulder) and wideout Emmanuel Sanders (groin) — should be able to practice this week. … Antonio Brown should return kicks again this week.