Doumit’s future with the Pirates in doubt 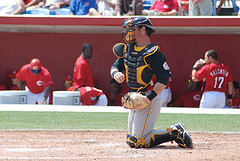 When the Pittsburgh Pirates signed catcher Ryan Doumit to a three year extension this past winter, Doumit was regarded as a building block for the future.
Fast forward 6 months and that is no longer the case.
Doumit, 28, had a breakout season in 2008, batting .318 with 15 home runs and 69 RBI’s but injuries have plagued Doumit for his entire career.
He has only appeared in over 100 games (2008) once in his career and will not hit that mark this season.
Despite Doumit’s inability to stay healthy, injury concerns are not the only reason why Doumit won’t finish his current contract in a Pirates uniform.
It’s the recent personnel moves the team has made that make Doumit a prime candidiate to be traded within the next year.
In the 2009 MLB draft, the Pirates drafted catcher Tony Sanchez with the 4th overall pick. Sanchez doesn’t project to have the bat that Doumit has but the Pirates drafted him to be their catcher of the future.
Sanchez projects to hit for average with 10-12 home runs and scouts around the league believe he has Gold Glove potential.
When or if the Pirates ask Doumit to move to another position, he will not be happy about it. The Pirates likely won’t have to visit that situation because there is a growing consensus that Doumit won’t be around when that decision has to be made.
Moving Doumit to the outfield won’t be a viable option in the future. The team is stocked with young talent in Andrew McCutchen, Jose Tabata, Lastings Milledge and Gorky’s Hernandez.
Another position that has been discussed is first base. Currently their is an opening but the team envisions Jeff Clement filling that position for next season. The Pirates believe Clement has the ability to be a 20-25 home run player in the majors.
Another circumstance to consider is that a number of MLB scouts indicate that Pedro Alvarez will move to first base, sooner rather than later.
While Doumit will not be traded this year, the Pirates expect Tony Sanchez to move quick through the minors with a projected ETA of Spring 2011.
By the way, one team that absolutely loves Doumit is the
Boston Red Sox.