Earning a berth to the Cup Finals, a special moment for the organization 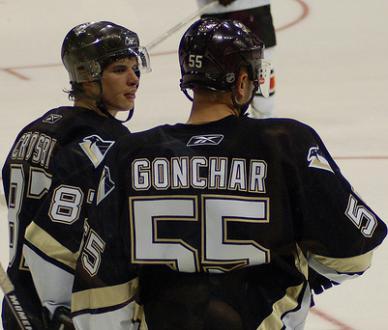 Earning a berth to the Stanley Cup Finals was emotional for the Penguins organization Tuesday night.
The team has under-gone a lot of change since last year’s run to the finals, including a coaching change which sparked the Penguins dramatic turnaround in mid-February.
It was a special night for the organization and there wasn’t a prouder person in the locker room following the game than owner Mario Lemieux.
Lemieux has taking more of role in the day to day operations over the past year as the Penguins have evolved into a Stanley Cup Contender.
Lemieux and Sidney Crosby share a close bond as Crosby has grown as a person and a player under Lemieux’s wing. The two shared a good moment in the locker room following the post-game celebrations.
* Following Carolina’s 4-1 loss in Game 4 of the Eastern Conference Finals, former Pittsburgh Steelers coach Bill Cowher is now 2-5, when involved in conference championship games.
*Pittsburgh has become the first team since the 1984 Edmonton Oilers to advance to the Stanley Cups Finals, the year after losing the Finals. The Oilers beat the Islanders four games to one in a rematch of the 1983 Stanley Cup Finals to win their first of what would be four Stanley Cups in the 1980’s.
Pittsburgh which has been often been compared to Oilers of the 1980’s, are hoping history is on their side.
Pittsburgh begins preparations for Detroit
Dan Bylsma and his coaching staff show a stronger emphasis on video instruction than the Penguins did under Michel Therrien.
The coaching staff will likely go over some tape from last year’s finals but the tape they should be going over is the film from the third period of the first meeting between these two teams in the regular season.
Pittsburgh trailed 5-2 in the third and Michel Therrien let the Penguins loose as they played an aggressive “ALL Attack” offensive style and the result was a thrilling 7-6 come from behind win.
How the Penguins played in that third period is how they are playing under Dan Bylsma. The up-tempo system the Penguins are playing now makes them more equipped to combat the Red Wings system which gave them fits last spring.
Bylsma and the Penguins return to the ice at 11:00 a.m., Thursday morning as the team begins preparing for game 1 of the Cup Finals.
Red Wings look to get healthy
The quick turnaround to the Cup Finals does not bode well for the Detroit Red Wings.
Star forward Pavel Datsyuk and defenseman Nicklas Lidströmare battling injuries and did not play in game 5 of the Western Conference Finals.
Lidstrom is expected to be fine for game 1 of the Cup Finals but there is some concern in the Red Wings organization regarding how effective Datsyuk will be in the finals.
Lidstrom and Datsyuk are just a number of players who are nagged by injuries right now for the Wings.
The Red Wings will not practice tomorrow and will go through a light workout on Friday.