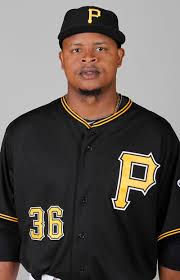 VOLQUEZ COVETS MULTI-YEAR DEAL
The Pittsburgh Pirates hope to come out of free agency resigning one of Francisco Liriano or Edinson Volquez. Liriano is the top priority but could command at the minimum a three year deal worth around $36 million.
Volquez, 31, will be an interesting case.
Pittsburgh is very interested in a one year deal but it remains to be seen if they have the stomach to go beyond one year.
There are questions around the industry as to how old Volquez really is and he’s one of those pitchers who is a gamble.
The sense on Volquez is he could be in line to nearly double his salary to around $9-$10 million per season.
MLBtraderumors.com profiled Volquez today and projected his next contract being 2 years, $18 million.
If that ends up being the case, look for the Pirates to pass, even if Liriano goes elsewhere.