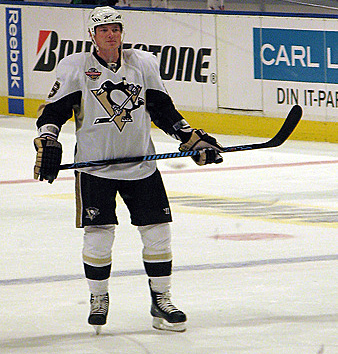 Wednesday afternoon could be a special time for Rob Scuderi as he will test free agency for the first time in his career as a known commodity.
Pittsburgh never made Scuderi an offer as the two sides have had a basic agreement for sometime that Scuderi was going to test free agency.
Although Scuderi will give the Penguins an opportunity to come close to any deal, Scuderi’s days as a Penguin are over.
He is on the radar of 5 teams and sources close agent Stephen Bartlett indicate, they expect a bidding war for Scuderi’s services, with offers in the $3.25 million range.
Pittsburgh continues to discuss the parameters of a new contract with Ruslan Fedotenko but as we mentioned earlier, Pittsburgh has yet to make an official offer.
Sources involved in the negotiations indicate the two sides will negotiate through July 1 and Pittsburgh will make an offer once they see what the market value for Fedotenko is.
Once Fedotenko hits the open market, he is likely gone.
Fedotenko is seeking a three year deal and this could be his last time to cash in. There will be significant interest in Fedotenko league wide and he is on the radar of a number of teams including the Penguins divisional rivals, the New York Rangers.