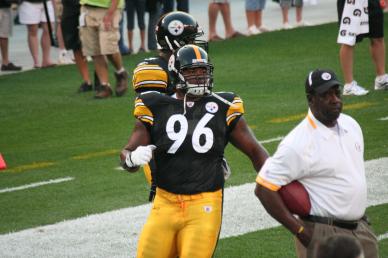 Just a week after being inactive, defensive end Nick Eason will return to the starting lineup Sunday afternoon against the Oakland Raiders. Defensive end Travis Kirschke did not practice for the third straight day and remains bothered by a calf injury.
Therefore, Kirschke has been ruled out for Sunday’s game against Oakland.
Eason will split time with 2009 1st round pick Ziggy Hood. Hood has seen increased playing time over the past two weeks.
Safety Troy Polamalu also did not practice today but Polamalu is believed
to be progressing. Polamalu is expected to go through individuals next week but with the short-turnaround against Cleveland, Polamalu is not expected to play until December 20th against the Green Bay Packers.
*Quarterback Ben Roethlisberger has been headache free this week and will start at quarterback for the Steelers.
Chris Kemoeatu was a full participant for the third straight day. Kemoeatu is on track to play Sunday and start.