Game 1 Analysis: What We Learned – Speed, physicality of Penguins too much for Islanders to handle 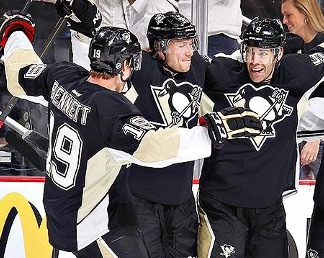 GAME 1 ANALYSIS: WHAT WE LEARNED
1. Coming into the series, a glaring mismatch I felt strongly in the Penguins favor was going to be the the speed, physicality of the Penguins forwards going up against the Islanders smallish group of defensemen. That area of concern for the Islanders showed up all night in Game 1 and it’s going to be one of their downfalls in this series.
The Penguins upfront are just too fast and too strong for the Islanders to handle and that was evident early on from Beau Bennett beating Andrew MacDonald wide on his first period goal to Brandon Sutter getting past Mark Streit wide and drawing a penalty with 43 seconds left in the first period. The Penguins were able to impose their will all night due to their speed and strength in the offensive zone.
Players all week talked about getting pucks deep on the Islanders and being a constant force in around the net. The Penguins executed that game plan to a “T” and played as head coach Dan Bylsma said, smash mouth hockey. Pascal Dupuis first period goal was a perfect example of that.
“I think the second goal in particularly, great example of where we wanted to play, smash mouth, up the middle, leave a dent in offensive zone, keep pushing them there and I thought we did a great job in around the net,” head coach Dan Bylsma said. “Especially in first period, we had shooters mentality and bodies in front of net.”
Notable forwards who played very aggressive games included Tanner Glass (team-high 6 hits), Brenden Morrow (5 hits) and Craig Adams (4 hits).
2. The Penguins were very impressive defensively in how they didn’t give the Islanders the middle of the ice and the Penguins were tracking the puck hard on the backcheck. When they do that, the Penguins are very hard to create offense on.
3. Two things we knew prior to the series that must happen for the Islanders to be competitive in this series; Win the special teams game and John Tavares have a Claude Giroux type of series that Giroux had last year in Round 1 vs the Penguins. Both of those areas were duds for the Islanders Wednesday night in Game 1.
Pittsburgh went 2 of 4 on the power play and 4-4 on the penalty kill. 22 seconds after Pascal Dupuis put the Penguins up 2-0 in the first period, Kris Letang was called for hooking at 13:45 of the first period and in what was a scenario where the Penguins had all of the momentum and I thought the game was pretty over then when New York failed to capitalize on the man-advantage in that spot. It was a golden chance for the Islanders to get back into the game.
As for Tavares, the Penguins made a focus on just making life miserable for him at nearly every situation. Tavares wasn’t ready for it and Brenden Morrow was tracking him down all night delivering some punishing hits and Kris Letang also got a couple big hits in on Tavares.
4. Penguins Goaltending coach Gilles Meloche does an excellent job of scouting the oppositions goaltenders and one weakness Meloche had seen with Evgeni Nabokov was him being vulnerable up high.
No surprise, the Penguins exploited that weakness on Nabokov who was beat high on goals from Beau Bennett and Kris Letang.
5. Game 2 will be the telling point of how quickly this series is going to end. If the Islanders don’t have a strong response and are overwhelmed again, I’d be shocked that this series goes more than four games. For the Islanders, Game 2 falls on the shoulders of Evgeni Nabakov. “I think it was a little bit too easy for them,” Nabokov told reporters. “Our all-around game has to be better. I guess it’s got to start with me, I’ve got to make key saves at the key times and give the guys a chance to battle.”
PENGUINS TOP 5 PERFORMERS IN GAME 1
1. Pascal Dupuis – 2 Goals, +2, 3 SOG, 2 BS, 2 Hits, 15:25 TOI / 3:20 PK
*Player of the game for the Penguins and his stock continues to rise for this summer*
2. Kris Letang – 1 Goal, +2, 3 SOG, 4 Hits, 25:20 TOI
*Was all over the ice, scored a beautiful PP goal and delivered some crushing hits on Tavares*
3. Mark Eaton – 1 Assist, +2, 8 BS, 19:00 TOI / 3:44 PK
*Team-high 8 blocked shots, second on team with 3:44 of ice time shorthanded*
4. Marc Andre Fleury – 26 Saves on 26 Shots
*Wasn’t tested much, but earned his 6th career playoff shutout*
5. *Paul Martin – 1 Assist, +2, 2 SOG, 1 BS, 21:32 TOI
*Locked down on John Tavares who was a non-factor*