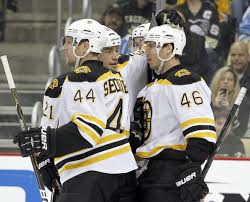 BRUINS TAKE GAME 1
The Boston Bruins have made a statement taking Game 1 of the Eastern Conference Finals, defeating the Pittsburgh Penguins 3-0 on Saturday night at the Consol Energy Center. David Krejci scored twice and Nathan Horton also scored in the win for the Bruins. Tuukka Rask was excellent in goal making 29 saves to pitch the shutout, the first playoff shutout of his career.
The Bruins shutout win matched the first time the Penguins have been shutout this season.
Boston leads the series, 1-0.
WHAT WENT WRONG FOR THE PENGUINS?
*It’s been well noted coming into this series that the Boston Bruins weren’t going to be New York Islanders or Ottawa Senators. This is a team clearly capable of winning this series and they showed that tonight.
First and foremost the Bruins got great goaltending from Tuukka Rask. He needs to be great in this series and he was tonight.
*The Bruins top line of Milan Lucic – David Krejci – Nathan Horton outperformed the Penguins top-2 lines. The three combined for 3 goals and 3 assists in the win.
*You can argue that Matt Cooke didn’t deserve a five minute major but Cooke’s penalty really set the Penguins back as the Penguins were never able to get their third line going.
*Defensively when the Penguins get into trouble, it’s when teams get out in transition against the Penguins which leads to the high risk Penguins getting out of position on the backcheck as they have problems of following the puck and not getting back into their lanes. It happens too often and that’s exactly what happened on David Krejci’s first period goal when Sidney Crosby had a missed assignment leaving Krejci all alone in the slot.
Nathan Horton’s third period goal at 7:51 highlighted how bad the Penguins structure was defensively in the second half of the game as Kris Letang and Matt Niskanen both made brutal plays in their own end following the puck on the left side and leaving Horton all alone in front.
*Faceoffs was a big issue for the Penguins. Boston won 32 of 48 draws. Sidney Crosby was 6 of 17 (35.3%) and Brandon Sutter was 3 of 10 (30.0%).
*The most concerning aspect of the Penguins loss is how the Bruins frustrated the Penguins in the final 25 minutes of the game. The Penguins lost control at the end of the second period which saw Evgeni Malkin being lost for the first five minutes of the third period and the Penguins would eventually implode in the third. Once Boston smelled blood in the third, they locked down defensively and controlled the neutral zone for much of the third period.”In latter 35 minutes of game we gotta away a bit from our execution,” Penguins coach Dan Bylsma said, citing the Bruins play in the neutral zone.

Citing sources, the NFL Networks Ian Rapoport says Steelers head coach Mike Tomlin has been diagnosed with Covid-19. Multiple members of the Steelers coaching and personnel staffs were sent home from the facility last week. The Steelers have yet to confirm the news.