Pressure turns to Fleury in game 3 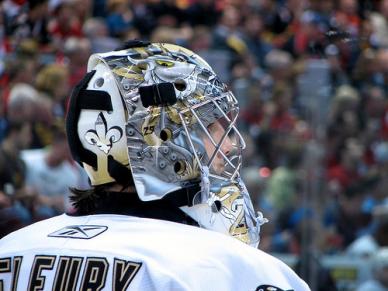 Game 2 Post-Game Notebook
Unable to tie the series at 1-1, the series shifts back to Pittsburgh Tuesday night as the Penguins will be in a must win situation like they were last year.
Despite only scoring two goals through the first two games of the series, the Penguins were upbeat following the game and believe this series is far from over.
For the second straight night, the inability to capitalize on prime scoring chances haunted the Penguins. The chances are there for the Penguins, averaging 32 shots in two games
Red Wings team speed causing Penguins problems
Evaluating the first two games of the series, the most noticeable difference between the Red Wings and Penguins is the team speed that the Red Wings have.
The Wings exceptional team speed gives them the ability to play their system to perfection. They close in on the opposition quickly in the neutral zone and Pittsburgh has to find a way to combat the Wings team speed in game 3.
The Wings team speed has also led to the Penguins being too passive in the defensive zone which was evident on Justin Abdelkader’s third period goal as Rob Scuderi and Hal Gill back peddled and did not step up on Abdelkader.
Red Wings proving you don’t need a big money goaltender
Two wins away from repeating as Stanley Cup Champions, the Detroit Red Wings are proving you don’t need a $5-$7 million a year goaltender to be a Stanley Cup caliber team.
Chris Osgood’s salary cap hit is $1.4 million for the next two seasons and while Osgood benefits from the Red Wings system, Osgood has made timely saves at key moments, the Red Wings have jumped out to a 2-0 series lead in the Stanley Cup Finals.
Timely saves is something Pittsburgh has not been able to get from Marc Andre Fleury. The inability to make a routine save at key moments has also been alarming for Fleury in the Finals.
In his second Stanley Cup Finals appearance and in the first year of a 7 year – $35 million contract, the pressure is on Fleury to help the Penguins climb back into the series.
Lineup changes in store for game 3?
It was being speculated this evening that Dan Bylsma strongly considered scratching Kris Letang for Philippe Boucher. Boucher took the majority of reps in the morning skate with Mark Eaton.
Going to be very interested if Bylsma opts to tinker with his lineup Tuesday night.
Messing with line combinations will be discussed internally tomorrow.
Bylsma opted to go with 12 forwards and insert Pascal Dupuis in the lineup to add more speed upfront.
Dupuis was a -1 and played just under 12 minutes.
Tidbits
Championship caliber teams get timely goals and make the opposition pay for mistakes. Thus far, the Red Wings are re-writing the book on that notion.
In game 2, the Red Wings took advantage of the Penguins miscues.
During a sequence where Marian Hossa’s line controlled the puck in the offensive zone for over a minute, the puck went to the corner and Kris Letang shot the puck down the boards and iced the puck.
Icing the puck during a situation like this is a routine play for a defenseman to make but what Letang didn’t know is that he had time to skate with the puck and chip it out of the zone as the incoming forechecker (Zetterberg) fell to the ice and was not near Letang.
The Result was an offensive face-off win for the Red Wings and seconds later the puck was in the back of the Penguins net with the game tied at 1-1 on a Jonathan Ericsson goal at 4:21 of the second period.
History is not on the Penguins side
44 teams have jumped out to a 2-0 lead in the Stanley Finals. 41 of the 44 teams have went on to win the Stanley Cup.
While history isn’t on the Penguins side and winning four of five games from the Red Wings is a monumental task, count me to the group of people who believe this series isn’t over yet.
The goals are going to come for Pittsburgh. They are averaging 32 shots on goal and Marc Andre Fleury should benefit from playing at home.
The major question mark will be whether it’s too late.