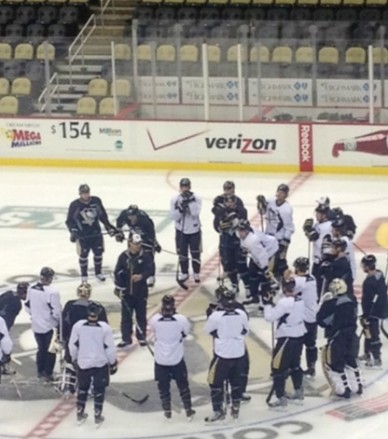 GAME 5 BUZZ
(1) Tonight we learn a lot about this Penguins team. “We’re preparing for best of three,” head coach Dan Bylsma said.
Over in the West, what you see from a top Cup contender in the Chicago Blackhawks, No. 1 seed, is that they have a killer instinct and know how to put away an inferior team. Leading 2-1 in the series, they didn’t give the Minnesota Wild any breathing room in Game 4, and took command of their series with a 3-0 shutout win in Game 4 on Tuesday night to take a 3-1 series lead.
By contrast the Penguins are regressing in this series after a dominating Game 1 performance.
“This can be great for us,” winger Jarome Iginla said of the Penguins dealing with the adversity of this series.
(2) Penguins head coach Dan Bylsma is taking a lot of heat for the lack of adjustments as the Islanders have dictated the play at even strength for three straight games. Defenseman Paul Martin admitted today that the Penguins are playing the Islanders the same way they did in the regular season.
“I don’t think we’ve underestimated them,” Martin said. “We’ve played them the way we played them in regular season, I think they’ve changed certain things, they’re coming hard,” Martin said.
As much as management and ownership love Bylsma, that could be his eventual downfall if the Penguins falter in this series.
“It’s playoffs, they have nothing to lose,” Martin said of the Islanders. “There’s no pressure there, they just come out and play.”
(3) When the Penguins signed Tomas Vokoun, it was for the possibility of Marc Andre Fleury faltering again in the playoffs. However, this is not the situation the Penguins wanted to be in as a goaltending controversy is never a good thing in the post-season.
There’s chatter of the Penguins possibly going back to Fleury for the start of Round 2, if Vokoun propels them into the second round. That’s just a disaster of a situation waiting to happen.
“Flower’s a competitive guy, he wants to get every puck he can,” Paul Martin said. “I think he’s his hardest critic, he gets down on himself when he doesn’t have to sometimes.”
Vokoun is looking to just enjoy the moment tonight.
“I thought it was a possibility, but you never know until the decision,” Tomas Vokoun said of learning yesterday of being named tonight’s starter. “He {Dan Bylsma} decided what’s best for the team for the moment. For me nothing changes, even when you don’t play, you don’t know,” Vokoun said.
“For me I’m going to enjoy it, wasn’t sure if I was going to get the chance to play in playoffs,” Vokoun said. “Nice to have chance. You play hockey to be in this moment, you don’t play hockey to go for morning skates, take shots and do that.”
Players said all the right things this morning of being confident in Vokoun.
“He’s played in playoffs before,” Sidney Crosby said. “Veteran guy, he’s confident, we’re confident in him as well.”
“I think as players you prepare for no matter what,” Paul Martin said. “We have faith in both goalies. You don’t expect anything to happen,” Martin said of a goaltending change happening.
(4) Players I heard from don’t seem to think the Penguins are giving the Islanders neutral zone as bad as it seems but the consensus from the Penguins defensemen is that the primary issue has been clearing pucks in front of the net. “Obviously we have to do a better job in front of the net, clearing those rebounds,” Martin said.
(5) James Neal seems to think he’s playing left wing tonight with Iginla and Malkin.
If the Penguins are to make a deep run, I felt coming into tonight’s game that Bylsma eventually has to either place Iginla on right wing with Sidney Crosby or go with a third skilled line of Morrow – Jokinen – Iginla. Jokinen tonight will be a healthy scratch so that can be thrown out the window for a possible scenario. Speaking of Morrow, his play has been very quiet the last three games.
(6) All signs do in fact point to Simon Despres getting back into the lineup. I’m surprised the coaching staff is turning back to him but in re-inserting him into the lineup, it’s the smart move to place him with Kris Letang who he’s been most comfortable with.
Bylsma on Despres: “Very capable guy,” Bylsma said. Mark Eaton stayed out with the scratches during the morning skate.
(7) The decision to get Joe Vitale back in the lineup is a smart one for the Penguins as the Penguins need more speed in the lineup and one thing about Vitale is that he seems to play his bests game when being re-inserted to the lineup. “Five out of six best games this year has been when he’s re-inserted into lineup,” Bylsma said of rating Vitale’s performances this year.
PENGUINS EXPECTED GAME 5 LINEUP
FORWARDS
Chris Kunitz – Sidney Crosby – Pascal Dupuis
James Neal – Evgeni Malkin – Jarome Iginla
Brenden Morrow – Brandon Sutter – Matt Cooke
Craig Adams – Joe Vitale – Tyler Kennedy
DEFENSEMEN
Brooks Orpik – Paul Martin
Simon Despres – Kris Letang
Douglas Murray – Matt Niskanen
GOALTENDER
Tomas Vokoun