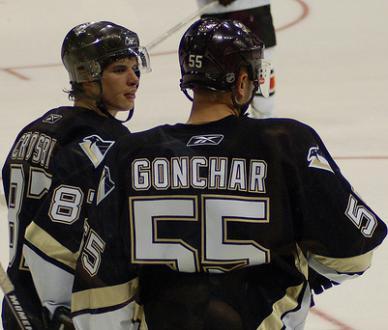 Series Tied 2-2
Morning skate notes: Veteran Bill Guerin will return to the lineup after missing the past two games. Guerin will be back on the top line with Sidney Crosby and Chris Kunitz.
Guerin has 8 points in eight games in the playoffs.
Neither Ruslan Fedotenko nor Alexei Ponikarovsky were on the top-4 lines this morning, a sign that both players are under consideration to sit tonight.
Fedotenko was elevated to the 2nd line in game 4 but was pointless with no shots on goal in 14:12 of ice time. Fedotenko is a minus-3 in six games and has just three shots on goal in the playoffs.
Sources indicate Mark Letestu will remain in the lineup, while Michael Rupp’s status is up in the air and will be a coaches decision. Rupp is healthy enough to play and is the only forward among the players on the top-4 lines this morning that is under consideration to sit.
Morning Skate Lines
Kunitz-Crosby-Guerin
Talbot-Malkin-Dupuis
Cooke-Staal-Kennedy
Rupp-Letestu-Adams
*Alexei Ponikarovsky did not take any line rushes with the top-4 lines and skated on a line with Chris Conner, Ruslan Fedotenko and Eric Godard who were among the extra forwards.
Ponikarovsky was demoted to the 4th line in game 4 and had zero shots on goal in 9:38 of ice time.
Jay McKee was the 7th defenseman in the skate and will be a healthy scratch for the 4th straight game.
* Montreal defenseman Andrei Markov did not skate this morning after traveling with the team to Pittsburgh.. He remains out as does Jaroslav Spacek who will not play. Spacek though has not been ruled out for the series. He’s believed to be close to returning to game action.