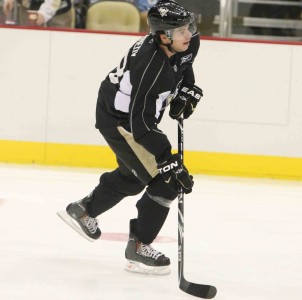 – The Pittsburgh Penguins return home to begin a three game, six-day homestand by hosting the Buffalo Sabres tonight at the Consol Energy Center.
– Pittsburgh is coming off a solid performance on its season-high five game road swing, posting a 2-1-2 record. Each of the final four games of the trip went to overtime, with the Penguins winning once in overtime (March 5 at Boston) and once via shootout (Feb. 26 at Toronto) and losing a pair of overtime contests.
Pittsburgh’s four consecutive overtime games leaves the team one shy of equaling the franchise record for most-consecutive overtime games, which was achieved March 4-13, 2007 (4-1 record.
– Pittsburgh has won five consecutive games against the Sabres, including all three games this season.
The Penguins are 7-1-1 in their last 9 home games against Buffalo, winning the season series 9 times in the last 11 seasons. Since 1999-2000, the Penguins own a 27-9-7 advantage over the Sabres.
– Pittsburgh comes into tonight’s game with points in seven of their previous 9 games (3-2-4). Buffalo comes into tonight’s game 5-0-2 in their last 7 games.

The Penguins morning skate is underway and Chris Kunitz is not skating on one of the top-4 lines.
Here’s how the lines have skaken up in the morning skate.

Cooke – Staal – Kennedy
Talbot – Jeffrey – Dupuis
Neal – Letestu – Kovalev
Rupp – Adams – Conner
*Chris Kunitz is skating again on the 5th line with Eric Godard and Dustin Jeffrey filling in as the center.
Bylsma yesterday called Kunitz “probable” but he has yet to take any shifts on the top-4 lines. Waiting word on his status for tonight.

1st unit: Kennedy – Staal – Kovalev
Letang – Martin
*James Neal is off the 1st unit and now on the 2nd unit.
2nd unit: Letestu – Rupp – Neal
Michalek – Jeffrey
*Chris Kunitz is taking an occasional rep with the 2nd unit. At this point it looks like he will sit out tonight’s game.