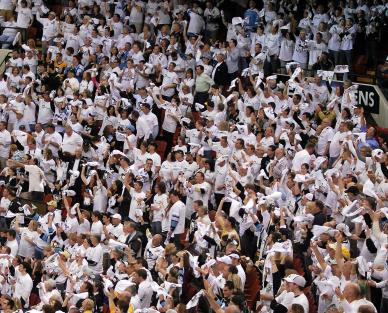 In the second round of the 1975 playoffs, the Penguins became just the 2nd team to lose a series after taking a 3-0 series lead as the Islanders won the final four games, including a 1-0 win in Game 7 at the Igloo.
The 1942 Toronto Maple Leafs were only other team to come back from a 3-0 deficit.

Former Pittsburgh Penguins Goaltender Ken Wregget has been apart of two game 7 wins. One for the Penguins and one for the Philadelphia Flyers.
In the second round of the 1989 playoffs, Pittsburgh held a 3-2 series lead over the Philadelphia Flyers after Mario Lemieux had a five-goal, eight-point performance in a 10-7 Game 5 victory against the Flyers on April 25, 1989.
Pittsburgh was on the verge of advancing to the Conference Finals for the first time during the Lemieux era, however, the Penguins would drop the final two games of the series, losing the series four games to three to their cross-state rivals..
Pittsburgh lost the final two games by a combined score of 10-3, including a 4-1 loss in game 7 at home as goaltender Ken Wregget replaced injured starter Ron Hextall to shut the door on Lemieux and the Penguins. Wregget was phenomenal, making 39 saves in the win.

In 1991, Pittsburgh won their first ever game 7 at home in the Divisional Semi-Finals of the playoffs, defeating the New Jersey Devils 4-0 behind a shutout performance from backup goaltender Frank Pietrangelo, advancing to the divisional finals.
Role players fueled the win as young winger Jiri Hrdina scored two goals in the victory.
Pittsburgh claimed their first Stanley Cup title in 1991.

In the second round of the 1993 playoffs, Pittsburgh suffered what is considered the most devastating loss in team history, losing to the New York Islanders 4-3 in game 7 of the divisional finals.
Pittsburgh who were the President’s Trophy winners for the best regular season record at 56-21-7, that included a 17 game winning streak near the end the regular season, were considered one of the most talented hockey teams in NHL history.
Pittsburgh held a 3-2 series lead but dropped game 6 by a score of 7-5 in Long Island and the heavy favorite Penguins were stunned by the New York Islanders in game 7 as David Volek ended the Penguins hopes for a third straight cup, scoring in overtime and lifting the Islanders to a 4-3 overtime win.
Pittsburgh had 32 more points than the Islanders in the regular season and the upset is considered one of the biggest in sports.

In the first round of the 1995 playoffs, Ken Wregget made his mark in another game 7 win at the Igloo, this time though he delivered playing for Pittsburgh.
Wregget made 31 saves leading the Penguins to a 3-0 shutout win over the Washington Capitals, winning the series four games to three.
In the series, Pittsburgh battled back from a 3-1 series deficit, winning the final three games of the series.

The 1996 playoffs would end up being another disappointing run for the Penguins that ended with another shocking game 7 loss at home.
In what ended up being Mario Lemieux’s closest shot to getting back for a third Stanley Cup Final appearance, John Vanbiesbrouck and the Florida Panthers shocked the Pittsburgh Penguins, eliminating the Penguins four games to three in the conference finals and advancing the Stanley Cup Final.
Pittsburgh held a 3-2 series lead but the Panthers took game 6 with a 4-3 victory at home, forcing a game 7 in Pittsburgh.
Tom Fitzgerald broke the hearts of many Penguins fans, beating Tom Barrasso with a slapshot from the blueline in the third period to give the Panthers a 2-1 lead. The shot eluded Barrasso and Vanbiesbrouck was sensational making 39 saves in the win.
Fitzgerald tormented the Penguins in the 1990’s as he was also apart of the 1993 Islanders team.