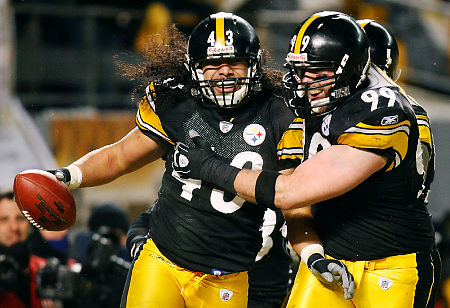 By Dale Grdnic
PITTSBURGH — Troy Polamalu’s eight-year NFL resume is filled with awards and game-altering plays, including three huge ones this season, but he’s never been named as the club’s MVP by his Pittsburgh Steelers teammates.
There’s a first time for everything. After a morning walk-through practice indoors Thursday, the Steelers were informed that Polamalu — through a vote by his teammates — was named the Steelers’ most valuable player. He’s the first safety in 30 years (Donnie Shell in 1980) to win the award.
Polamalu also was named the Steelers Walter Payton Man of the Year. This team honor, as chosen by several outside organizations, automatically qualifies Polamalu for the NFL’s Payton award that will be announced during Super Bowl week in February, 2011, in Dallas.
“Quite honestly, I really don’t know what to say about any charity award,” Polamalu said. “I don’t think people do it for any type of recognition, so it’s kind of uncomfortable for me to get an award like this.
“On the team award, football is such a perfect team sport and it’s hard to make anybody — especially our team and the way we play defense — a most valuable player. So, I’ve never been a fan of either award. (And) if I was ever a coach, I’d probably never have an award like this because it’s such a team sport.”
Polamalu has missed the past two games with a right ankle-Achilles injury, and his status to play at Cleveland Sunday is still up in the air. Polamalu is expected to practice Friday, but he said that all depends.
“I struggled with the injury for about a month before I missed the first game, and it feels better than that,” Polamalu said. “But we don’t want any setbacks before the playoffs. … It was both frustrating with the Jets loss and exciting with the victory over Carolina.
“I don’t think I’ve ever been part of a more dominant performance by any defense than the last game that we played. I’m hoping to play this week, but it’s obviously Coach Tomlin’s decision.”
According to several teammates, Polamalu nearly was a landslide pick as MVP.
“It’s well-deserved for that guy, what he’s meant to our team and our defense,” Steelers wideout Hines Ward said. “It’s his first one, and it’s well-deserved. It’s always great to win an award voted on by your teammates, all the players, your peers, and that’s what this is all about.”
Steelers quarterback Ben Roethlisberger agreed.
“He’s really been a difference-maker for us this season,” Roethlisberger said. “It was great to have him back after last season, so I think it was a great call, a no-brainer, really, to pick Troy as our MVP. It was a great choice.”
Polamalu has 81 total tackles this season, including 57 solo, one sack, seven pass breakups, one forced fumble and one recovered to go with his six picks. But he made the biggest impact during a three-game stretch that ended with him re-injuring his leg. The first was an interception near the goal-line late in a 19-15 overtime win at Buffalo.
He also forced a Joe Flacco fumble that led to the winning touchdown in a 13-10 decision at Baltimore. And he returned an interception for a touchdown to turn the game around in a 23-7 home win against Cincinnati. Unfortunately for Polamalu, he dove over the pylon for that score and hurt his leg again. As usual, Polamalu downplayed his part in those plays.
“There’s so many different parts that go into making plays,” Polamalu said. “The Buffalo game, it was Willie Gay. He broke up the pass. The Baltimore play was a great call, and anybody could have made it. Nobody tried to block me. I’m honestly not trying to be humble. It’s the truth. The Cincinnati play was made by B-Mac. He broke up the timing a little bit with the route.
“Sometimes, what you guys see is probably not really the play that’s made. It takes pressure to make a quarterback hesitant (and throw a pick), and it takes great coverage for someone to get a sack. So, the plays that we see aren’t the plays that you guys see made from a fan’s perspective. Especially on this defense, it takes all 11 guys to make a play.”
Polamalu added that he dreamed about being a professional football player since his youth, but he never believed he would be making commercials. When asked about his favorite one, Polamalu quickly went into pitch mode.
“Head and Shoulders is a brand that I support and I love,” Polamalu said. “It gives me thicker and fuller hair in one week, guaranteed. … I kind of pinch myself on a huge (TV) set with a hundred people waiting to serve you and all these cameras and stars. In football, I envisioned myself being that at a young age. Being on those sets is humbling.”
Roethlisberger won the Steelers MVP award last year, while James Harrison captured the honor in 2007-08. And Willie Parker won the award in 2006.
Notes: Polamalu, RB Mewelde Moore (right knee), OT Chris Scott (non-injury related) and DE Aaron Smith (triceps) did not practice Thursday, while OLB Jason Worilds (knee) was limited. And OLB LaMarr Woodley (left knee) went through a full practice.