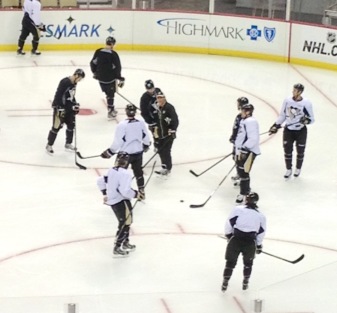 MORNING SKATE BUZZ
CANADIENS (27-11-7, 57 PTS) @ PENGUINS (32-10-0, 64 PTS)
Tonight’s goaltending matchup will be Marc Andre Fleury vs Peter Budaj. Budaj is 7-1-1 with a 2.19 GAA and .915 save percentage. No. 1 goaltender Carey Price has struggled mightily of late, posting a 6.59 goals-against average in losing his last three starts. He will get the night off. The Penguins should be getting a motivated Canadiens team who have given up 12 goals in their last two games. The Canadiens are looking to hold off the Bruins for the No. 2 seed in the East.
Fleury is 8-1-0 with a 1.59 GAA in his last nine starts.
*The Penguins went through an optional skate, although the bulk of players (11 forwards, 7 defensemen, 2 goaltenders) did skate this morning. The notable players who didn’t skate included Jarome Iginla, Jussi Jokinen and Brooks Orpik.
Evgeni Malkin was a full participant in the skate and will be a coaches decision tonight. We’re awaiting official word on him.
*Sidney Crosby, Paul Martin, and James Neal all skated together prior to the morning skate for the third straight game. Goaltending Eric Hartzell just signed on Sunday was on the ice with the three. Hartzell yesterday was added to the NHL roster but was not on the ice for the morning skate.
From an intensity standpoint, these skates have been light to moderate with Crosby, Neal, and Martin. Of the three, Neal is the closest to returning to the lineup but the Penguins intend to be cautious with him. Neal remains symptom free. Martin who is said to be about 2-3 weeks from getting clearance,was in full gear this morning.
*The Penguins have won 19 of 21 games, including 13 of 14 at home.