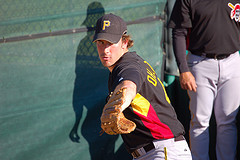 By John Perrotto
Ross Ohlendorf and Mike Hampton both faced 23 batters Wednesday night at PNC Park in the Pirates‚Äô 4-1 loss to the Houston Astros.
Ohlendorf, the Pirates‚Äô right-hander, threw the first pitch for strikes to 14 of those batters. Hampton, the Astros‚Äô left-hander, threw 17 first-pitch strikes.
That might not seem like a big difference but Pirates manager John Russell felt it was the deciding factor in his team dropping back to .500 at 4-4 and the Astros snapping their five-game losing streak.
‚ÄúHampton got ahead of the hitters all night and put our guys on the defensive,‚Äù Russell said. ‚ÄúRoss was the opposite. He kept falling behind and running a lot of 3-2 counts and it‚Äôs tough to pitch effectively that way.‚Äù
Ohlendorf used his two-seam fastball effectively in his first start of the season against the St. Louis Cardinals last Thursday as he allowed three runs in six-plus innings. However, the sinker abandoned him in his second start.
‚ÄúI had no command of my fastball. I didn‚Äôt know where it was going,‚Äù Ohlendorf said. ‚ÄúI walked the first batter of the game on four pitches and that was a pretty good sign it was going to be a struggle.‚Äù
Astros leadoff man Michael Bourn, he of the measly .301 career on base percentage in 681 plate appearances going into Wednesday, did indeed
draw a four-pitch walk in the first and Astros eventually scored a pair of runs in the inning on consecutive sacrifice flies by Carlos Lee and Hunter Pence.
Lee‚Äôs two-run double in the third increased the Astros‚Äô lead to 4-0 and Hampton made it stand up as he pitched six shutout innings.
Hampton has made only 27 starts in the past five seasons because of an assortment of injuries and it‚Äôs been 10 years since he had that fantastic 22-4 season for the Astros. However, he showed what command can do for a pitcher whose stuff has deteriorated.
‚ÄúEverything he throws has movement and he‚Äôs become kind of crafty at this stage of his career,‚Äù said first baseman Adam LaRoche, who accounted for the Pirates‚Äô lone run with a leadoff homer in the ninth off closer Jose Valverde.
‚ÄúEvery pitch he throws has movement and he has a knack for making them look like strikes but they move just enough that they gets outside the strike zone and you wind swinging at bad pitches.‚Äù