Harrison the center of attention at Tuesday’s OTA workout 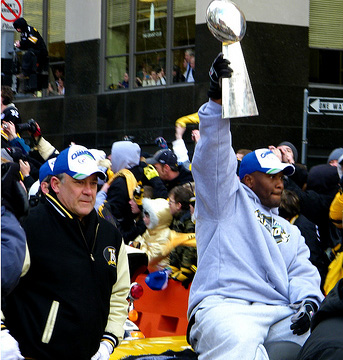 PITTSBURGH — Linebacker James Harrison was the center of attention at Tuesday’s organized team activity workout. And it had nothing to do with football.
Instead, Harrison was grilled by reporters over his decision to skip Thursday’s White House visit by the Steelers.
The Steelers will be honored by President Barack Obama for their victory in Super Bowl XLIII.
“Yeah, I m surprised about (the media) making a big deal out of this,” Harrison said. “It’s like, ‘Oh my! James Harrison is not going to the White House. He must be a devil worshiper.’ ”
Harrison pointed out that no one in the media questioned him in June of 2006 when he skipped the Steelers’ White House visit in honor of their win in Super Bowl XL.
“Hey, James ain’t changed. I guess my profile did. But I didn’t change,” he said. “I’m not going because I don’t want to go.”
Yes, Harrison’s profile has changed.
Four years ago, he was a backup. Now he’s the reigning NFL Defensive Player of the Year and a Super Bowl record-setter for that 100-yard touchdown return of an interception.
Also, Obama has obviously developed a close relationship with Steelers’ chairman Dan Rooney.
Rooney stumped for Obama during the 2008 presidential election. In return, Obama nominated Rooney, a proud Irishman, as the U.S. ambassador to Ireland.
“James didn’t go the last time we went to the White House and nobody made a big deal about it,” Steelers linebacker James Farrior said. “So I think if he would have kept his mouth shut, no one would have noticed this time.”
“Really, I could care less about the (media) reaction this is getting,” Harrison said. “That’s my decision, and I’m sticking with it.”
And what will Harrison be doing Thursday when his teammates are at the White House?
“Nothing,” he said. “Just working out.”