Hartnell in denial about undisciplined penalties 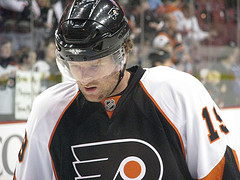 Following the game, the Philadelphia Flyers talked about how it was difficult to generate any momentum because of the penalties they were taking.
30 goal scorer Scott Hartnell played a factor in the Flyers being unable to generate any momentum. Hartnell had three minor penalties on the night and was assessed a 10 minute game-misconduct late in the third period
Interesting quotes from Hartnell following the game on how the penalties he took were not undisciplined
‚ÄúThe first one, Matt Cooke slashed our goalie in the face and you can‚Äôt let that happen, you have to protect your goalie, he‚Äôs our best player,‚Äù Hartnell said. ‚ÄúThe second one, I was just driving the net and ran out of space and their guy pushed me into the goalie.”
‚ÄúThe third one, was more stupid. End of a shift, throughout my career, when I stay out too long, I have a brain cramp. And obviously, I took a stupid penalty‚Äù