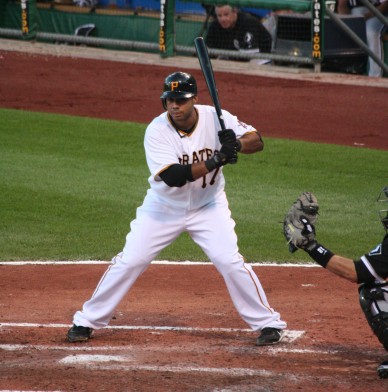 Starting third baseman Pedro Alvarez has picked up right where he left off the 2011 season, struggling mightily at the plate.
Alvarez batting a woeful .133 (4-for-30) in spring training with 2 home runs and 3 RBI’s, has been overmatched all spring at the plate, showing little signs of being able to contribute at the Major League level.
Enter spring training in the best shape of his career has been a plus for Alvarez but it hasn’t help him one bit at the plate.
“The small sample size of spring training gives us some indication for concern but does not tell the whole story, ” Pirates GM Neal Huntington told Inside Pittsburgh Sports.com on Monday morning.
The Pirates have been pleased enough with Alvarez where they don’t feel starting the season in Triple-A will do him any good, despite Alvarez working on a new hitting approach that might be doing him more harm than good.
“It is our expectation that Pedro will be our regular third baseman to start the season, Huntington said.
DEEP PITCHING DEPTH
The Pirates enter this season with arguably the deepest pitching depth in the starting rotation they’ve had during GM Neal Huntington’s tenure with the Pirates.
The Pirates feel they are six strong in the rotation with adequate starters buried on the depth chart like former first round pick Brad Lincoln.
Erik Bedard, Jeff Karstens, James McDonald and Kevin Correia enter the season as the top-4, while Charlie Morton will be back at somepoint in mid to late April and A.J. Burnett likely back soon after.
“A baseball team never has enough pitching but we are pleased with the options we will have once all of our starters return to full health, ” Huntington said.
Among the current top-4, Kevin Correia’s spot in the rotation might be short lived as the team is believed to view Burnett, Bedard, Morton, Karstens and McDonald as their likely top-5 when at full health.
Correia due $4 million this season, is believed to already being shopped.
HUNTINGTON ON MATT HAGUE
First baseman Matt Hague is the buzz of spring training, batting .417 with 4 home runs and 9 RBI’s in 36 at-bats. Hague, 26, has caught the eye of GM Neal Huntington this spring but it remains to be seen whether the Pirates will open a spot for Hague at somepoint this season. Hague a natural first baseman, is behind Garrett Jones and Casey McGehee at first base, and behind the likes ofÂ Alvarez,Â Josh Harrison and McGehee at third base.
Huntington though, said today he feels Hague has developed to the point where he can help the Pirates at the Major League level in the short and long term.
“Matt Hague developed to a point where we added him to the 40 man roster this past off-season because we believed he could help our major league team, ” Huntington told Inside Pittsburgh Sports.com. “He came to spring training with a chance to make our major league team and his work this spring has reinforced our belief that he can help our major league team in the short term and the longer term.”
Hague last season batted .309 with 12 home runs and 75 RBI’s in 141 games with Triple-A Indianapolis.